This year, Identigene reaches a company milestone by celebrating 20 years in business. 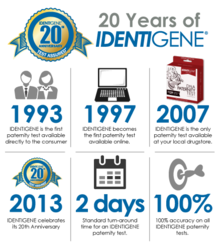 We are proud of our rich company history as an industry leader in DNA paternity testing beginning in 1993.

Over the last 20 years, Identigene has been a pioneer in DNA paternity and relationship testing and remains America’s #1 brand for private DNA paternity testing recognized by doctors, lawyers, and the American consumer with distribution in over 25,000 store locations nationwide. This year, Identigene reaches a company milestone by celebrating its 20th Anniversary.

“We are proud of our rich company history as an industry leader in DNA paternity testing beginning in 1993," says Doug Fogg, COO of Identigene. "Identigene was the first laboratory to use STR technology for commercial paternity testing services, the first to offer DNA paternity services online, and the first and only company to bring DNA paternity testing to the general consumer through drugstores and supercenters across the country. We have an outstanding team of experienced scientists, a state-of-art laboratory completely automated, and a knowledgeable and compassionate client support team. They efficiently handle the thousands of cases processed each month while yielding 100% accurate results in just two business days. But the most rewarding aspect of our careers at Identigene is the hundreds of thousands of people who have found peace of mind in using our services to answer some of life’s most important questions about relationship," Fogg concludes.

Prior to Identigene, DNA paternity tests were typically court ordered and performed using antiquated techniques resulting in a complicated and costly service that was impractical for most families. Today, availability of the Identigene DNA Paternity Test Kit online or in drugstores and supercenters empowers individuals with direct access to the laboratory. Now, DNA paternity testing is fast, accurate, confidential, and convenient with sample collection in the privacy of your own home.

Mr. Sorenson, the father of eight children, had a passion for genealogy and understood the importance of knowing for certain the relationship identified in the family line. His vision was to make DNA paternity testing affordable and accessible to every person in the world. Although Identigene was available for online purchase before the acquisition, Mr. Sorenson wanted to make DNA testing even easier. So, in 2007, Identigene launched its paternity test kit into drugstores. Steve Smith, Executive Director of Identigene says, “Mr. Sorenson had an uncommon gift for innovation and tenacity. He expected no less than to see Identigene in all major drugstores and supercenters in America—there is great satisfaction in having achieved his vision.”

Today, Identigene test kits can be purchased in nearly 25,000 stores throughout the United States and it remains the first and only DNA paternity test kit available in major drugstores and supercenters nationwide. When asked what the public might expect from the science of DNA over the next 20 years, the COO says he’s excited for the future. “Next generation DNA testing will become faster, more informative, and more accessible. We’re testing new technologies that will again change the paradigm of DNA testing in the future,” commented Fogg. “Like currently portrayed on television or in movies, you’ll wait minutes, not days, to identify biological kinship and more.”

Identigene is a privately-held, wholly-owned subsidiary of Sorenson Genomics, which is a highly accredited genomic laboratory renowned for its expertise in human identity, forensics DNA testing, and population genetics.

Visit http://www.DNAtesting.com for industry-leading resources including how-to videos, a store locator, product reviews and a blog dedicated to current issues in DNA and paternity testing. Connect with Identigene on Facebook at http://www.facebook.com/identigene or follow the company on Twitter at @Identigene.