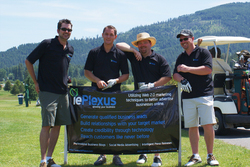 The event was really amazing. Any day you're playing golf with friends on a beautiful course for a noble cause is a great day, in my book.

Members of the iePlexus Online Media team took part in the Selkirk Association of Realtors®' Charity Golf Tournament in Blanchard, Idaho, on June 20, competing with 33 other teams in a scramble-style tournament at the Stoneridge Golf Course. The yearly tournament gathers donations to grant thousands of dollars in scholarships to local graduating seniors and continuing college students, as well as donating thousands of dollars in grants to groups in need of funding for their community projects and programs in Idaho's Bonner and Boundary Counties. iePlexus pledged as Platinum Sponsors for this year's charity tournament, from which half of the proceeds were awarded as a grant to Panhandle Habitat for Humanity.

"The event was great, and the other teams were fun and enjoyable to communicate with," says Jason Thurston, President of iePlexus, who captained the iePlexus golf team for the tournament. "You couldn't have picked a better day -- 85-90° and sunny. I would love to be a part of more charity events like this in the future. I am proud to support Habitat for Humanity; there is nothing more rewarding than being a part of giving families in need a home."

Habitat for Humanity is dedicated to providing affordable housing for families in need, using volunteer labor for construction and selling their homes at no profit. This places their goals in line with those of the Selkirk Association of Realtors®, and made them a perfect match for their Charity Golf Tournament. The Charity Golf Tournament in 2007 succeeded in raising $31,500 in funds for local charities in Bonner and Boundary counties, and historically the group has been instrumental in providing funding for local non-profit organizations.

Company pride for the event was high, thanks in no small part to a shared respect for the charity of choice. "Habitat for Humanity is great -- I used to build houses for them back in Philadelphia before I came to Seattle," says Kris Themstrup, one of iePlexus' Web 2.0 Marketing Technicians. "The event was really amazing. Any day you're playing golf with friends on a beautiful course for a noble cause is a great day, in my book."

Unfortunately, opinions were not so unified on the state of play for the iePlexus team, who took 4th Place in the event. "I think we had a chance at winning, and then we teed off," jokes Themstrup, who kindly adds, "I feel we played pretty well, even with a rookie on our team. Thankfully, my golf skills allowed for my team to be 'experimental' with their playing. I'd love to play in the next charity tournament, and as the company golf 'ringer', I definitely expect to be invited."

"I played better than expected for someone who had only played on one other course in their life, and had only been playing for two weeks; that is to say, I played badly...very badly!" says Doug Russell, Social Media Consultant for iePlexus and the team's least experienced player, who nevertheless has a healthy sense of humor about his skill. Despite this healthy self-deprecation, the team agrees that they played well overall, and are truly proud to have been a part of the event. "I feel great about representing iePlexus," says Themstrup, "and it's an honor to be a part of such a great company that also gives back to the community."

With its focus on assisting online businesses with their Web 2.0 marketing needs, charitable organizations mesh well with the iePlexus ideal. A dedication to providing affordable and effective social media marketing strategies for ecommerce businesses of all sizes is the core strength of iePlexus, and community outreach has become another tenet of this corporate philosophy. "We will definitely continue to contribute to charities," adds Jason Thurston, who takes great pride in the company's charitable donations. "Especially if they include events as entertaining as this one."

The iePlexus team also took part in a charity raffle at the event, and Sales Manager Carson Cummins walked away with the Grand Prize -- a night at the W Hotel in Seattle, a football autographed by Shawn Alexander, and two Seahawks tickets. "I can't wait until the next tournament iePlexus sponsors," says Cummins. "As a team, we shot great. The course was great, and the weather was even better."

iePlexus.com is a company specializing in providing comprehensive Web 2.0 marketing strategies for online businesses. View the iePlexus' social media blog to learn more. The Selkirk Association of Realtors® is a non-profit organization whose membership is comprised of Realtors®, appraisers, and other businesses affiliated with the real estate profession.