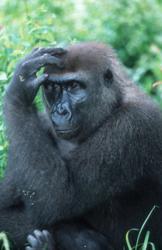 WWF commends the Water and Forest Ministry and AALF for this important arrest.

Law enforcement officials in Gabon have arrested five men accused of possessing illegal animal products, including those of endangered species.

The raids, conducted by the country’s Water and Forest and Defense Ministries with the assistance of World Wildlife Fund (WWF) partner Support for the Application of the Wildlife Act (AALF), yielded an alarming number of ape, leopard and elephant parts.

Among the items confiscated were the head and hands of an endangered gorilla, along with 12 chimpanzee heads and 30 chimpanzee hands. The skins of 12 leopards, a portion of lion skin, snake skins and five elephant tails were also discovered.

“WWF commends the Water and Forest Ministry and AALF for this important arrest,” said David Greer, WWF African Great Ape Manager. “However, the massive collection of protected species confiscated in this operation is highly disturbing. To my knowledge, there has not been a seizure of great ape body parts of this magnitude in Central Africa in the last 10 years.”

AALF, known by the French acronym for Support for the Application of the Wildlife Act, is a joint program of Gabon’s Water and Forest Ministry, Conservation Justice and Brainforest. AALF assists local authorities with wildlife crime investigations and supports rigorous prosecutions. It follows a model established by the Last Great Ape Organization in Cameroon, which has been replicated with success in neighboring countries.

“The problem of illegal wildlife poaching and trade is not specific to Gabon; such specialized dealers exist throughout Western and Central Africa. But these arrests demonstrate that stopping them is possible with effective law enforcement,” said Luc Mathot, founder of Conservation Justice.

The suspects are being held in custody while an investigation is conducted. They are expected to appear in court for legal proceedings this week.

“Recent ivory poaching prosecutions prove that the judicial authorities in Gabon now regard wildlife cases with high importance. We hope they will do the same for ape and big cat cases such as this one,” Mathot said.

“This monumental arrest is only the first step toward catalyzing positive change in upholding wildlife law in Gabon. In order to establish a long-term deterrent to committing wildlife crime, appropriate consequences must be applied in this and all cases of illegal poaching and trade,” said Greer.