American Author Boldly Goes Where No Foreigner Has Dared Tred 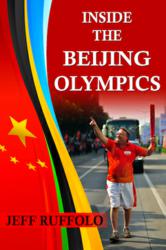 'Inside the Beijing Olympics' by Jeff Ruffolo

To think that I was naive was the understatement of the century but during the Olympic Games, I was able to make a difference in the perception of the Olympics in China to the world media.

In the world we live in today, there are few secrets more dark, magical and mysterious than the inner workings of the Chinese Government and Communist Party. No American is ever invited behind the curtain to sit and enjoy a lunch of dim sum with the Wizard of OZ; but now, in a new work, “Inside The Beijing Olympics”, by first-time author, Jeff Ruffolo, we are instantly transported into the inner workings of the greatest summer Olympic Games ever – the Games of the XXIX Olympiad in China.

Since every great story is about the journey and not the end, Ruffolo takes the reader through his stumbling into broadcasting NCAA Volleyball on commercial radio in the early 1990’s and, with the development of the Internet and not less than a great deal of hustle on his part, advanced his rudimentary radio broadcasting skills on a small country music station in Provo, Utah to become America’s radio “voice” of Olympic Volleyball at the 1996 Atlanta, 2000 Sydney and 2004 Athens Summer Olympic Games. “From there, I dreamed the dream of being part of the Olympic Games in China,” said Ruffolo who parlayed this Olympic broadcasting experience into becoming the Senior Expert for the Chinese Olympic Organizers.

In meandering through the incredibly intricate world of the Chinese Communist Party, Ruffolo worked sans road map and compass; because there is none. In a world where all Western concepts of business are tossed aside like so much used bathwater, Ruffolo navigated alone, leaving behind a wife, daughter, golden retriever puppy and classic 1965 Volvo sports car in America and arrived up at the doorstep of the Chinese Olympic Organizing Committee with two suitcases of clothes … and a dream. “To think that I was naive was the understatement of the century but during the Olympic Games, I was able to make a difference in the perception of the Olympics in China to the world media,” said Ruffolo. “Inside the Beijing Olympics” also details the complex interpersonal relationships between East and West … one the author says, “could fill the Grand Canyon and then some”.

In the chapter entitled, “The Three Stooges”, Ruffolo explains how he tried to use the power of laughter and mirth to instill with his Chinese counterparts the human commonality by screening videos of the Stooges, only to be rebuked as senior Party members chastised him for showing a movie in which a “short, fat bald man was purposely being punished” and asked pointedly, “what did he (Curley) do to warrant being slapped and pushed” by his brother Moe Howard?

“Inside the Beijing Olympics” is a true story … and as true stories go, the author vividly pulls you into the narrative in a friendly, easy to read presentation. Specific chapters highlight:

By the start of the 2008 Summer Olympics, Ruffolo rose to the highest levels ever obtained by a foreigner in modern Communist China, writing speeches for senior Government leaders and becoming the de-facto spokesman of the 2008 Beijing Summer Olympics to the world media. Be captivated by this fascinating tale of political intrigue, mystery and magic as you too will be transported ... Inside the Beijing Olympics.

"Inside the Beijing Olympic”, published in ebook format by eBookIt.com, is available through several popular online retailers, including Amazon.com, BN.com and Apple’s iBookstore. Author Jeff Ruffolo is available for interviews. Book reviewers and media outlets may request a review copy of the ebook by emailing the author direct at Ruffolopr(at)hotmail(dot)com.

In addition to media interviews, author Jeff Ruffolo is available for freelance writing and consulting assignments, specifically pertaining to government relations and business to business contacts in China.

About the Author
Jeff Ruffolo is an international sports/marketing expert who has extensive international business experience in China where he is a consultant at the highest levels of the Chinese Government. He earned a Bachelor of Arts Degree in Journalism from Brigham Young University and has served on the White House Advance Staff, managed the publicity for two republican Congressional campaigns and sold airline charters to the Los Angeles Lakers, Sylvester Stallone and Phil Collins and Genesis. Jeff lives and works in Guangzhou, China.

About eBookIt.com
Based in Sudbury, Massachusetts, eBookIt.com has helped thousands of authors and publishers get their books converted to ebook format, and distributed to all the major ebook retailers, including Amazon.com, Barnesandnoble.com, Apple iBookstore, Kobo, Sony Readerstore, Ingram Digital, and Google eBookstore.