Billlionaire Alki David just released a second video in response to statements made by the CEO of CBS, Leslie Moonves. The video is even more fact filled and includes a discussion by a leading copyright expert, Michael Zeller of Quinn Emanuel. 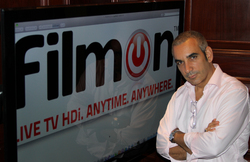 I love America. It makes me sad that a great symbol of American culture like CBS is soiled by the greed of so few.

In response Billlionaire Alki David said, "Whilst looking for evidence to bolster my fight with CBS, my eyes were opened to a terrible injustice. I love America and it saddens me that a great symbol of American culture like CBS can be soiled by the greed and racketeering of so few."

Mr. David has just released a second video in response, which can be found at http://www.viaconned.com. The video is even more fact filled and includes a discussion by a leading copyright expert, Michael Zeller of Quinn Emanuel.

As demonstrated in the new video and supported by Court documents, CNET.com -- also known as download.com -- was responsible for distributing 95.5% of all LimeWire downloads. In May 2010, U.S. District Judge Kimba Wood granted a summary judgment in favor of the music industry's claims that LimeWire's software maker and its founder Mark Gorton committed copyright infringement, engaged in unfair competition, and induced copyright infringement (United States District Court Southern District of New York -- 06 CV 5936 (KMW)).

Mr. Zeller has been frequently named as one of the nation's top intellectual property litigators. In 2009, Michael Zeller received the prestigious California Lawyer Attorney of the Year (CLAY) award for "extraordinary achievements" in intellectual property litigation. Mr. Zeller was featured in the January 2010 issue of The American Lawyer, which named Quinn Emanuel as the "Top Intellectual Property Firm in the U.S.," and in the January 2010 issue of IP Law & Business magazine.

Mr. David is an innovator of Video Technology and an Entertainer. Having produced directed and acted in many film and television shows, Alki David carries the moniker of the Eccentric Billionaire. Mr. David is Founder & Chairman of the “Television Anywhere” website http://www.FilmOn.com. He is also listed as the 45th richest Man in the UK on the Times Rich List.

Recognized as one of the world’s most eminent Toy designers and collectors of Toys, Mike Mozart has earned himself a reputation on YouTube as being an outspoken critic of failed consumer products. He has a following of nearly 400,000 Subscribers to his channel which is at http://www.youtube.com/JeepersMedia.

FilmOn.com Inc. (http://www.Filmon.com) was founded in March 2009 by FilmOn.com Plc, a Berlin-listed company (2F0A-BER) and is operated independently by a dedicated U.S. management team with offices in Los Angeles and London. BattleCam.com (http://www.Battlecam.com) is the 24 x 7 live reality community TV channel of FilmOn.com.