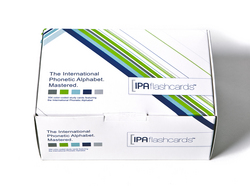 We understand phonetics can be a challenge, but we’re here to simplify the content and help students master the IPA.

Minokidowinan Language Resources, LLC is excited to announce the launch of its company and initial product, IPAflashcards: The International Phonetic Alphabet. Mastered.

The product consists of a deck of 354 color-coded study cards featuring the complete set of characters according to the official 2005 International Phonetic Alphabet chart. The flashcards are playing-card size for portability and contain a high-gloss, ultra-violet coating for durability. They are the first commercially-available flashcards featuring the International Phonetic Alphabet, according to Kellie Kalish, president of Minokidowinan Language Resources.

“I was studying phonetics in grad school and was unable to locate commercially-available flashcards featuring the IPA, which seemed absurd,” she explained. “In response, I set out to create cards that were designed to showcase aesthetics and quality in addition to function.”

The International Phonetic Alphabet flashcards are ideal for students, as well as professors and speech pathologists. The cards are sold exclusively online through Amazon.com and http://www.ipaflashcards.com. They are available with free shipping and a 30-day, money-back guarantee. Large orders for the flashcards may be placed directly through the company under certain conditions.

In addition to releasing the International Phonetic Alphabet flashcards, Kalish has simultaneously launched Minokidowinan Language Resources. The company’s name, Minokidowinan—which means “good words”—is derived from an endangered language: Anishinaabemowin. A portion of the profits will be used to fund endangered language research, documentation and revitalization efforts. Minokidowinan Language Resources was created, in part, to develop quality language learning materials that appeal to a more visual and design-oriented generation. “We understand phonetics can be a challenge, but we’re here to simplify the content and help students master the IPA,” Kalish said.

For more information about the company or its innovative International Phonetic Alphabet flashcards, please email hello (at) ipaflashcards (dot) com or call (616) 541-2311.

About Kellie Kalish
Kellie Kalish, age 29, launched Minokidowinan Language Resources, LLC after being laid off due to the ailing economy. The company and its initial product, IPAflashcards, are based on a field with which Kalish has had an enduring relationship: linguistics. Kalish learned German at the age of 6 while living in Austria and has since had formal language instruction in French, Czech and Spanish. She has visited more than 20 countries and has lived in five. Kalish earned a B.A. with a double major in International Relations and German and has completed coursework toward an M.A. in TESOL (Teachers of English to Speakers of Other Languages). She currently resides in Grand Rapids, Mich.