Jackson Township, York, PA is selling a 1992 Ford L9000 Dump truck with Plow and Spreader in an online auction that ends June 25th. 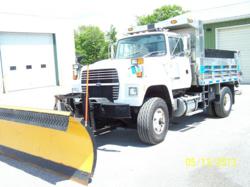 Jackson Township’s online auction of their government surplus equipment ends on June 25th. The 1992 Ford L9000 Dump truck with Plow and Spreader has 53,656 miles and a 10-speed spicer transmission.

In an online auction that started on May 13th and ends on June 25th, Jackson Township in York County, PA is selling a 1992 Ford L9000 Dump truck with Plow and Spreader for additional non-tax revenue. By using an established, but innovative online government auctions site specifically designed for municipalities, Jackson Township is conducting a 6-week auction of its surplus heavy equipment. The agency is looking to garnish thousands of dollars to be put back into its budget.

Jackson Township is using online auction site Municibid.com to sell the items. Municibid was established in 2006 and has grown steadily since, with over 1,000 government agencies auctioning surplus through the efficient online system. The township is auctioning the surplus item online because the website has an established nationwide reach growing every day. Auctions on Municibid result in competitive bidding and fair prices for government surplus items.

Jackson Township started using Municibid successfully in 2011 to sell their surplus, including a 1985 Ford L8000 Dump Truck with plow and spreader and an 88 Ford 6610 Tractor Mower w/1998 Alamo 60" Flail Mower. Their last online auction netted thousands of dollars to go back into the township’s budget.

Municibid Founder and CEO, Greg Berry said, “Taxpayer demand and tightened budgets require government agencies to look for new ways of increasing non-tax revenue. Municibid is an easy way to achieve this and at no cost to the agency.” Berry added, “Auction items will reach a much broader, national audience of competing bidders, leading to better net results.”

Jackson Township’s online auction of their government surplus equipment ends on June 25th. The 1992 Ford L9000 Dump truck with Plow and Spreader has 53,656 miles and a 10-speed spicer transmission. It is described as drivable in good mechanical condition and working order. With 2 weeks remaining on the auction, the item has attracted hundreds of page views and is expected to help Jackson Township make thousands of dollars in non-tax revenue.

The Jackson Township surplus auction of this truck can be found online here:
https://www.municibid.com/detail.asp?id=15855&n=1992-Ford-L9000-Dump-truck-with-Plow-and-Spreader

About Municibid.com
Municibid.com is an online government auctions platform serving 1,000 state and local government agencies across the US from cities like Philadelphia, Boston and Baton Rouge, to small towns, authorities, school districts and universities. Municibid is designed for government agencies to more effectively sell surplus, forfeitures and other no longer needed items to the public via a convenient and easy-to-use website. Municibid proactively markets items nationwide via social media and traditional avenues at no cost to the selling agency.