Author J.A. Leary, once employed by Pratt&Whitney-Rocketdyne at Kennedy Space Center, finds life after the space shuttle program an enjoyable challenge as he turns his career goals from software engineering for rocket engines to writing paranormal fiction. His updated release of The Angel Hunter uses the University of Notre Dame as backdrop and delves into the forbidden biblical record known as The Book of Enoch, which tells of fallen angels known as The Watchers. 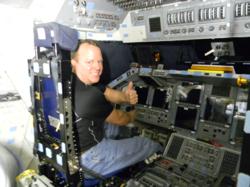 In the cockpit of the space shuttle Endeavour

Attention to detail and believing you can do the incredible are staples in both Human Spaceflight and writing fiction. --JA Leary

Now that NASA has laid off most of the workforce at Kennedy Space Center, an unknown future faces them: a future that has no sign of job market stability and a financial uncertainty which is holding many ex-aerospace workers emotionally hostage. Such is not the case for author J.A. Leary. Now, he is creates his own adventures through writing. http://www.jaleary.com

J.A. Leary is the author of the critically acclaimed novel, The Angel Hunter. The chilling abduction of Victoria Hunter’s infant twins leaves her in shock, her memories in shambles, and those around her believe she is suffering from post-partum psychosis. Victoria’s story may challenge some deeply held beliefs as she takes an epic journey through worlds of both good and evil, fighting to bring her twin sons back from the unexplainable. Leary bases his narrative on many hours of research into apocryphal texts, scientific theories, and mythical locations.

“Attention to detail and believing you can do the incredible are staples in both Human Spaceflight and writing fiction,” Leary says. He tells of an afternoon years ago, looking out to the launch pads, closing his eyes and listening. He says, “It was the vibration of adventure I felt. Kennedy Space Center is a special place: its voice carries on the ocean breezes, calling for us to cast off the bonds of this world. And that voice continues to call all of us who ever worked there. Without that voice, I am not sure the courage to write would have ever found me.”

He knows the days of launching massive vehicles into space are gone, at least for him. No one asks him anymore to track down a record in a shuttle database, or to debug a computation for bolt torques. Like many Space Shuttle workers, he has experienced a bit of a paradox, going from being told how important they are to being let go because their jobs no longer matter. Leary says he never thought his job defined him or gauged his worth, however.

These days in his home office, Leary has a section for keepsakes, awards, and signed astronaut photos from his years on the Space Shuttle program. But it is a small section. On other walls are large paintings of Victoria Hunter, painted while writing The Angel Hunter; on his computer is the manuscript for The Tantalus Key, the next part of Victoria’s story. Still, his years at Kennedy Space Center have been hard to let go of, he admits.

When asked what advice he has for other displaced Shuttle workers, his answer is simple. “It is much easier to be happy when you are evolving and learning new things. So try something different and see what happens. You will be surprised.”

To arrange an interview with former Space Shuttle employee and author J.A. Leary, please contact him.