Discover the Spanish side of Jamestown Island's history in a guided walking tour followed by a reception at La Tienda. 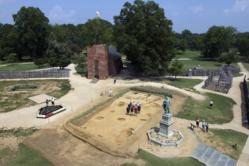 La Tienda and Historic Jamestowne have come together on a joint venture premiering June 20th, 2013. Discover "Jamestown - The Spanish Story Revealed" and walk back in time through the James Fort site to uncover the hidden story of the Spanish at Jamestown. A reception to savor this intriguing tale and to explore authentic tastes from Spain will follow at La Tienda's Retail Store.

Spain's history in Virginia precedes that of the English. Spanish explorers sailed into the Chesapeake Bay in 1561 and returned to Spain with the son of a Virginia Indian chief. Baptized Don Luis, he traveled to Spain, Mexico, and Cuba and then returned to Virginia in 1570 with eight Spanish Jesuits to found a mission. Don Luis later led an attack with Virginia Indians on this same mission, ending Spanish Virginia in 1571. Wary of English attempts to settle in Virginia after the 1570s, Spain’s ambassador to England, Pedro de Zuniga, relied on a spy network at the English court.

With tensions mounting, the English built Jamestown and positioned it in anticipation of a Spanish attack. The attack never came but the threat was real: a Spaniard, Don Diego de Molina, was captured and held for five years at Jamestown. In 1613, he smuggled out a letter detailing the conditions at Jamestown and advocated its destruction. Concerns about Spain lingered and served to influence the political decisions of the colony. The hidden story of the Spanish at Jamestown provides new insights and a fresh perspective on the relationship between the two rival European powers of the late 16th and early 17th century.

This program is presented jointly by Historic Jamestowne and La Tienda. Space is limited and reservations are required. Historic Jamestowne is located at 1368 Colonial Parkway on Jamestown Island, just seven miles west of Williamsburg. The La Tienda Retail Store is located a short drive away at 1325 Jamestown Road. The guided walking tour of the Jamestown site will last about one hour, followed by a wine and tapas reception at La Tienda. The total cost is $45. Please click here to reserve your space online.