Eclectic musician Jeffrey Fisher announces the release of his ambitious new 2-CD set that explores the subjects of war and spirituality in relation to the ancient Sanskrit text of 'The Bhagavad Gita'. This important text is among the most widely read in the world, and Fisher translates it both literally and personally with 'Ocean of Consciousness' two discs, 'The Bhagavad Gita Suite' and 'The River'. The fine art for the CD cover is provided by renowned Taos, NM-based artist and painter Charles Collins of the Charles Collins Gallery. Fisher will support this instrumental new age and world music CD with a Western regional concert, lecture and media tour in June/July 2008. 10% of CD profits earmarked for charities that protect sacred sites and benefit the arts. Early CD reviews are very positive. 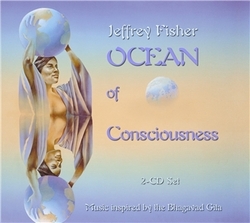 My own studies have shown an emotional impact, but there is even a distinct mathematical correlation between musical scales and the DNA. Listening to music with natural properties brings one into alignment with one's earthly rhythms.

War is never black and white; nor is nature. In his new work, 'Ocean of Consciousness', eclectic composer and performer Jeffrey Fisher explores the spiritual challenges and emotional impact of socio-political life on earth, as well as, our paradoxical relationship with nature. This 2-CD set includes 'The Bhagavad Gita Suite' and 'The River', both produced by Fisher. It will be released today via his label 'Healing Music of the Southwest' (Burnside Distribution).

Lauded for his accomplished musicianship and appreciated for his unique personal philosophy, Fisher's latest project will sooth listeners while also offering solace to those tormented by today's grim war headlines. 'The Bhagavad Gita Suite' enables Fisher to share his concept of "Emotional Consciousness". In 'The River', Fisher is more introspective, inviting listeners into a musical realm that reflects his deep understanding of the flow of nature. As is his want, the two pieces cross a variety of styles from New Age to world, from jazz to classical; pleasing, soothing, yet bold, Fisher's instrumentation is at its best.

'The Bhagavad Gita' is an ancient tale, the best-known and perhaps most widely-translated of all Sanskrit texts in print. Fisher's musical translation, 'The Bhagavad Gita Suite (Disc One)', offers an instrumental snapshot of Prince Arjuna, a young man in emotional turmoil at the dawn of a momentous battle, which, he laments, is sure to result in the death of great warriors, teachers and kinsmen on both sides.

Today, as young soldiers struggle to make sense of their personal experiences of modern warfare, Fisher's primary interest is the core issue behind this timeless yet timely text: how one lives a spiritual life while also involved with challenges like the trauma of war and devastation.

"'The Gita' was among the favorite books of many great thinkers, including Ralph Waldo Emerson, Henry David Thoreau, Aldous Huxley and Mahatma Gandhi; these men are, indeed, supreme examples of the wisdom and self-realization that one can find in the teachings of The Bhagavad Gita," Fisher says.

'The River (Disc Two)', presents Fisher's relaxing exploration of meaningful living in the modern natural world. The three nature-inspired pieces on this CD -- 'Love 360 Degrees', 'Forest of Light' and 'The River' - play with traditional forms like the canon, the twelve-bar blues, and subtle extensions of harmonies and melodies.

'Ocean Of Consciousness' can be used for both emotional and physical healing and massage therapy. "Music has a powerful impact," says Fisher "My own studies have shown an emotional impact, but there is even a distinct mathematical correlation between musical scales and the DNA. Listening to music with natural properties brings one into alignment with one's earthly rhythms."

Taos-based Painter: Charles Collins made his fine art painting 'Ocean of Consciousness' available for the CD's cover art, in following with the artists' previous collaborations.

Fisher has committed 10% of CD sales profits to be divided equally between the Sacred Sites Protection Council of Escuela de la Raza Unida, and the God in the Arts Foundation in Taos, New Mexico.

In the past year, since releasing the iParenting Media Award-winning Fairytales and his critically-acclaimed 'Triumph of the Spirit's' achievement in the Top 100 New Age Charts, Fisher has made numerous live and televised appearances throughout the country.

In June 2008, Fisher embarks on tours to the Southwest and the Pacific Northwest to support 'Ocean of Consciousness'. The live performances will include inspirational teachings on his concept of emotional consciousness as it relates to 'The Bhagavad Gita' and today's war culture. Up-to-the-minute tour dates are available on Fisher's website Healing Music of the Southwest, where one can also find various promotional tools like "making of" videos and digital download DropCards distributed at shows.

Fisher's new music is available online as music downloads, and at mainstream bookstores and new age stores and gift stores. SLP is $18:99; wholesale orders available through Burnside Distributing Corp. of Portland, OR.

About the Artist:
At the time of this printing, Fisher again finds himself immersed in the creative process. He is finishing his ninth album, a piano concerto called THE THIRD MOVEMENT, preparing for the publication of three books on Eastern philosophy, cooking and poetry, respectively, and continuing the building of his off-the-grid "green" ranch, Satyagraha.