What Bible Prophecy Says about December 21, 2012 – The Plan Bible Has Developed an eBook That Answers the question: Is It the End or Just Another Sign?

12/21/2012 has been speculated for years, but what does the Bible say about it? Now you can find out what God says, in His own words, about the future through http://www.PlanBible.com 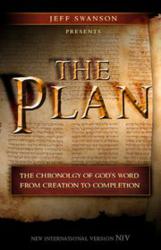 The Plan is God’s own words, demonstrating that the “end of the world” is really the beginning for believers, which is the future time when many prophecies will be fulfilled.

For the first time ever Bible prophecy has been ordered chronologically in God’s own words. All 2,500 verses yet to be fulfilled placed in logical order gives a clear picture of future events. The Plan is a unique adaptation of the Bible, organizing the entire Bible chronologically, providing each passage that is relevant to a biblical story in a single place, rather than spread throughout 66 books.

The historical fact that Jesus Christ lived is unrefuted by historians and other religions, and every believer in Christianity. The evidence of His resurrection is also overwhelming and stands alone as testimony of the event. Jesus predicted that He would be resurrected and His enemies even witnessed it. Jesus fulfilled prophecy in every stage of His life, from His birth to living in Nazareth, to His ministry in Israel, dying on a cross and beyond to His resurrection. If all of these evidences point to the validation of historical truth then we can rest assured that He will fulfill the prophecy of His return.

The impact of compiling all of the passages chronologically is awe-inspiring, providing a great tool for biblical study, understanding biblical history, and deepening one’s faith. The Plan is a unique adaptation of the Bible that will increase your understanding of God’s Word.

Jeff Swanson with the Plan Bible over 20 years in developement