The Exorbitant Price Every Family Pays For Having A Working Mom

Author Kathryn Michaels discusses challenges faced by a working mom trying to balance family and work as a breadwinner in her latest book, Sweet On Me. 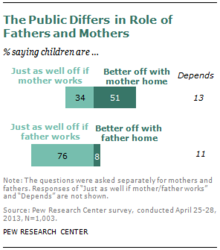 Author Kathryn Michaels discusses challenges faced by a working mom trying to balance family and work as a breadwinner in her latest book, Sweet On Me.

According to a recent Pew Research Center analysis, working moms are the sole or primary provider in four-in-ten households with children, as compared to one-in-ten (11%) back in 1960. Not all are breadwinners by choice. 63% of these women are single mothers who earn a median income of $23,000, less than a third of the $80,000 median total family income of married mothers who earn more than their husbands. With adequate resources and someone to take care of the family, it can work out for the single mother but what if she doesn’t have them? Who pays the price when she has to work?

It never used to be this way.

When the Second World War ended, American women celebrated the return of their men from the war. The suburbanization sprawl started. Congress passed the G.I. Bill, allowing returning World War II veterans to be re-skilled and trained so that these men would be fully equipped to provide for their family as the main breadwinner. The age of the single family income took off into full swing.

Two decades later, the baby boomer generation came of age at a time when the dual-income household concept started to take root in America, driven primarily by rising interest rates, mortgages and student loans. With these changes came a decline in marriage rates as women worked more and married later. The divorce rates climbed to record highs in the 1980s. One in three marriages ended in divorce. It was the dawn of the “Me” generation.

Society continued to see changes with the arrival of the new millennium. The employment rate of married mothers with children increased from 37% in 1968 to 65% in 2011. With the entrance of generation X and Y into the workforce, changing domestic patterns gave birth to progressive women like Sheryl Sandberg and Ursula Burns. The “Lean In” culture started to take root as women stepped up and began to take an active role as the main breadwinner of the family.

But married women only make up 37% of breadwinner moms. It’s the 10.3 million single mothers, up from 3.4 million in 1970, living with children younger than 18 in 2012 that find it harder to raise their children without adequate support. Although a recent study from the Academy of Social Sciences in the U.K. shows that kids' literacy, math skills and behavior are not affected whether or not their mother worked or stayed home during the first years of their lives, working moms are still guilt-ridden and worried. Even the American public has voiced concerns in the recent Pew Research survey about the toll that having a working mother may take on children. Roughly three-quarters of adults (74%) say the increasing number of women working for pay has made it harder for parents to raise children.

In the end, it is the children who have to live with the consequences of the working mom’s choices, regardless of whether she has to work from necessity or by choice.

Kathryn Michaels is the author of Bedroom Secrets, a reality-inspired series about millennium moms, released by Islandreamz Publishing and available on Amazon, at http://www.amazon.com/Kathryn-Michaels/e/B00AQKP6Y4. Her novel, Sweet On Me explores the trials and tribulations of a single working mom. For more information about her books or Kathryn Michaels, please log on to http://www.writemekathryn.com/. Members of the media who wish to review her books may request a complimentary copy by contacting the publisher, Islandreamz Publishing at +1-416-275-5195.