50 Keith and The Girl Podcast Fans Tattoo and Brand Themselves

50 fans of The Keith and The Girl podcast have undergone some form of body modification in honor of the show. Jesse Smith just became the 50th by tattooing the letters KATG onto the inside of his lower lip. 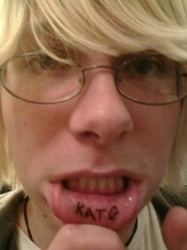 This 19-year-old tattooed the letters KATG, in honor of his favorite show, onto the inside of his lower lip.

The comedy team of Keith Malley and Chemda hit another milestone as Jesse Smith became the 50th fan of the Keith and The Girl podcast to get a tattoo or branding. This 19-year-old tattooed the letters KATG, in honor of his favorite show, onto the inside of his lower lip. Jesse, a listener of the show for almost 5 years, is about to join the Air Force, and is a dedicated fan of Keith and Chemda.

There are now 48 people who have a Keith and The Girl themed tattoo and 2 others who have branded their skin. Most notable are Richard Ochoa and Michael Garod. Richard has added so many KATG tattoos on his arm that it’s now known as The KATG Sleeve – a mural of KATG references. Michael Garod has a huge branding of the KATG logo on his right torso. To create the branding Michael had to endure the outline being cut into his skin that was then slowly filled in by permanently burning his flesh with an electric gun over a period of hours. The event was captured on a recent Keith and The Girl TV episode.

Keith and The Girl, a popular comedy podcast that began on March 7, 2005, has created over 1100 shows. It’s hosted by comedian Keith Malley and singer Chemda, an unmarried couple living in Queens, New York. In the show, which records live five days a week, Keith and Chemda discuss their lives and current events in humorous and unrestrained fashion. The show is at the top of podcast lists everywhere, has been featured in every major podcasting book as the leader of the pack, and has won several awards including Best Podcast, Peoples’ Choice Podcast of the Year, and Best Mature Podcast, among others. They’ve been called The Moguls of New Media by the Wall Street Journal as well as being featured in many newspapers and magazines, including USA Today, The New York Times and Maxim.