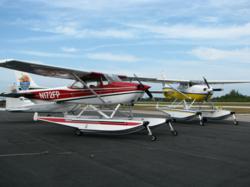 Key West Seaplanes, based in Key West, Florida is the region's premiere seaplane charter company. The company operates a fleet of aircrafts and offered their professional advice to other seaplane operators when contacted by Dale Smith, a writer for Water Flying Magazine. "One real issue in seaplane operations is the day-to-day impeccable upkeep of our seaplanes" states Julie Ann Floyd, Key West Seaplanes pilot and owner of the company's aircrafts. "I was approached by Mr. Smith to offer suggestions and advice for others that fly seaplanes, whether they do so as a business or privately. I want others to learn through the years of experience we have here at Key West Seaplanes which is why I granted the interview."

In the article that appears in Water Flying's March/April 2013 edition Dale Smith shares "Floyd takes her corrosion protection program to the highest level. Her beloved Cessna 206, 305KW, is not only the flagship of her fleet, it also came away from Sun N Fun 2012 with the Grand Champion Seaplane award." This aircraft is a custom-designed and custom-built luxury seaplane built exclusively for Floyd and Key West Seaplanes by the world-renowned, world seaplane authority, Wipaire, Inc of So. St. Paul, MN. Since this article went to publication, Floyd has completed yet another custom luxury seaplane also built by Wipaire with the project being completed in April, 2013. This newest Cessna 206 was named Reserve Grand Champion Seaplane at Sun N Fun 2013. Key West Seaplanes put to use it's Grand Champion seaplane in Little Palm Island Seaplane charters, private seaplane charters to The Bahamas/Caribbean as well as seaplane rides and tours in and around Key West.

Floyd is also quoted in this Water Flying article sharing her seaplane experience with "You really don't want to use regular grease in saltwater environments"...."It just won't hold up to the salt." Writer Dale Smith shares that "She (Floyd) feels so strongly about using the right marine-grade product right from the start, that when she was told the new Wipline 3450s for (one of) her 206 had standard-grade grease in the bearings, she rejected the set and had them replaced with a set of Wipaire's new-generation 3450s with green grease. Floyd continues with "We're the first to operate the new 3450s in commercial service. The floats have one-third fewer moving parts than the previous design. Plus, the design enables most of the gear-retraction mechanism to be housed in the dry part of the float- up out of saltwater." This means a safer and more reliable seaplane float for Key West Seaplanes Miami to Key West charters and all aspects of the company's services.

Later in the Water flying article, Floyd adds, "To further help fight corrosion, Wipaire also uses anodized metal for the landing gear." She excitedly states, "I've had them for a few months now and there's zero signs of corrosion on the metal parts. That's pretty amazing in this environment." Key West Seaplanes offers private seaplanes from Miami/Ft Lauderdale to Little Palm Island, Hawks Cay, Cheeca Lodge as well as Key West and all The Bahamas and Caribbean. "For all of these services we offer a luxury, private seaplane charter experience in our seaplanes- and we enjoy offering the flights in award-winning aircraft." states Floyd.

Key West Seaplanes is based in Key West and in addition to seaplane charters from the mainland to The Keys, the company also offers Seaplanes to The Bahamas including Bimini, Nassau, Andros and Freeport. Other services include aerial sightseeing of Key West, The Seven Mile Bridge as well as aerial sightseeing via seaplane of The Dry Tortugas and Fort Jefferson. The company offer many years of experience in aerial photography and aerial videography.