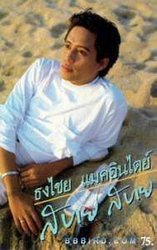 A Las Vegas stopover will become a little known link between Bird Thongchai McIntyre’s Los Angeles concert last Saturday, May 22 and a New York concert on Monday, May 31. The “Superstar No.1 of Thailand” is almost certain to be scheduling a dinner stop at Kung Fu Plaza, which is the oldest and most authentic Chinese and Thai restaurant in Las Vegas.

Bird, best known for his Thai pop music, has sold more than 20 million albums, making him the number one singer in the history of Thailand. He has won more than 20 awards, including the Inspiration Award at the MTV Asia Awards, Bets Song from Channel [V] Thailand Music Video Awards, and an Achievement Award at the Virgin Hitz Awards. He is also a hit television actor and movie star.

“We are very honored for this chance to prepare dinner for Thailand’s living legend,” says Alan Wong, general manager of Kung Fu Plaza. “My family has taken pride in being a favorite among Thai people and other visitors from Asia. Much of the credit belongs to my mother and father, who have always worked hard to retain as much authenticity as possible, including the beverages we import.”

One such beverage, which is also the primary sponsor of Bird’s concerts, is Chang beer. It is the number one selling beer in Thailand. Recently, Chang beer was also awarded a gold medal from the 2010 World Beers and Drinks Selection.

“Chang beer has been growing in popularity around the world,” says Wong. “What makes it so unique is the deep well water from Thailand. We recommend it, of course, as a beer that fits perfectly with the food.”

After more than 36 years, another visit by Bird would not be Kung Fu Plaza’s first visit by this celebrity. Most recently, Wong and his staff were visited by Miss Universe. However, Wong says a visit by Thailand’s “Elvis” will be among most exciting for his staff and family.

Not only do the two “We Love Our King” concerts mark the first time Bird has ever performed outside of Thailand, but partial proceeds will benefit “His Majesty the King on the Auspicious Occasion of His Majesty the King’s Birthday Anniversary of Eighty-Four Years in 2011.” The singer is joined by guest artists Kathaleeya English, Da Endorphin, Pinky, Na Khom and Ko Tee Aram boy.

Kung Fu Plaza maintains a menu that includes almost 800 dishes, predominantly from China and Thailand. The menu selection represents one of the most expansive Chinese and Thai menus in the region. To review a complete menu, visit http://www.kungfuplaza.com.