To Catch all the NASCAR Action, the Neon Garage at Las Vegas Motor Speedway is the Hottest Spot in the Sport

NASCAR action is coming soon to one of the most exciting venues in racing -- The Las Vegas Motor Speedway. The recently constructed Neon Garage provides fans an unforgettable NASCAR experience and unprecedented views of this year's UAW-Dodge 400 Sprint Cup event and Sam's Town 300 Nationwide Series race. 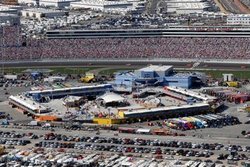 It's no surprise that one of the most exciting cities in the world is home to one of the most exciting venues in sports -- Las Vegas Motor Speedway. Just miles from the Las Vegas Strip, LVMS is the site of the recently constructed Neon Garage, located in the speedway's infield. NASCAR fans now can get even closer to the racing action by experiencing the race from one of the most unique venues on the circuit. Constructed prior to the 2007 race, the Neon Garage was a hit at last year's NASCAR Weekend, and further improvements to the Neon Garage are sure to electrify action-hungry fans at this year's UAW-Dodge 400 Sprint Cup event and Sam's Town 300 Nationwide Series race.

Fans with Neon Garage access will feel the roar of the engines as they watch their favorite NASCAR stars from a variety of unique vantage points. While the racers are the stars of the show, there is much more to do and see in the Neon Garage. Fans with Neon Garage credentials will receive unprecedented access to the race teams and drivers, unique concession areas, live entertainment, and a bird's-eye view of the Winner's Circle. After the checkered flag is waved, the winning driver pulls through a gauntlet of race fans and emerges into a stadium-like setting to share his victory with the race team and thousands of fans in the Neon Garage.

Fans in the Neon Garage also can enjoy many live-entertainment performances. This year's NASCAR Weekend will feature performances from the world-famous Blue Man Group, along with performances by some of the world's best tribute artists playing everything from Elvis Presley to Garth Brooks to Tom Jones.

Race fans and members of the national media who travel from race to race have sung the praises of the Neon Garage. "Trust me on this," wrote Tom Jensen of FOX Sports. "For fans, it's really cool with great sightlines and lots of attractions."

NASCAR officials have been equally as complimentary of the project. "I congratulate Chris Powell (LVMS General Manager) and Las Vegas Motor Speedway for launching this improvement project," said NASCAR Chairman Brian France. "The new garage area gives race fans an opportunity to see their favorite drivers close up. The strong relationship between fans and drivers is a NASCAR hallmark, which is alive and well at LVMS."

Neon Garage credentials for the 2008 NASCAR Weekend are going fast, but a few select packages are still available through the Las Vega Motor Speedway Website:
http://www.lvms.com/track_info/neon_garage/