"Leadership is dead," say bestselling leadership authors Jacqueline Moore and Steven Sonsino. International managers are overwhelmed with constant frantic firefighting, office politics and spiralling demoralization. Frustrated by the daily grind of their jobs and the falling support from senior executives in business management, they don't have the time or energy to be good leaders. These are the findings of an international business survey, of managers in 42 countries, by bestselling business authors Steven Sonsino and Jacqueline Moore. 'The executives we've been talking to over the past 12 months want to lead well, they want to be inspirational leaders, but they just can't do it. They face more personal pressure and frustration than at any other time in their leadership career,' says Sonsino. 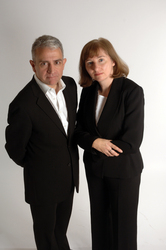 Leadership is dead, say bestselling business authors Moore and Sonsino, as constant firefighting and company politics overwhelms business managers all over the world

"Leadership is dead," say bestselling authors and leadership speakers Jacqueline Moore and Steven Sonsino. Managers all over the world are overwhelmed with constant firefighting, petty office politics and spiralling demoralization. They are so frustrated by the daily grind of their jobs and the lack of business development support from senior executives in business management, they don't have the time or energy to be good leaders.

These are the findings of a survey of managers in 42 countries by bestselling business authors Steven Sonsino and Jacqueline Moore. ''The executives we've been talking to over the past 12 months want to lead well, they want to be inspirational leaders, but they just can't do it. They face more personal pressure and frustration than at any other time in their leadership career,'' says Sonsino.

As one executive said, their most pressing concern was how to make the time to be a good leader. ''How do I minimise time in plate-spinning without it being my full-time job?''

Another asked: ''How do you create the space to stop the daily fire-fight to 'do leadership'? My business development is dying.''

The international research survey, conducted by the authors over the past 12 months, reveals that today's leaders are very well meaning, but business performance, productivity and profitability are doomed because managers are paralysed with frustration. ''And it's a vicious cycle,'' says Sonsino. ''Frustration leads to inaction, which adds to how overwhelmed they feel, which increases their frustration.''

In fact, today's executives and managers are more paralysed with frustration than they have ever been, says Sonsino. 'Some believe now that they're not getting the right kind of support from their executive boards. Others are more frustrated than ever with their teams. Some very honest managers are frustrated most of all with themselves. That they can't get their people moving.' For many managers their leadership futures and their careers are at stake.

Another echoed this idea by asking: ''How do I maintain the right balance between being dissatisfied with the status quo and being perceived as too critical or negative?''

These questions together with practical solutions to the challenges faced by today's executives are included in a new leadership development report, 'The Death of Leadership', by Sonsino and Moore.

With the report the authors makes a hard business case for the so-called 'soft' people skills. The authors point out that despite most managers today being more highly educated than managers in the past, with many attending business schools all over the world, there are still major gaps in their knowledge.

''While managers may know what to do to lead their people -- enthuse their staff, use emotional intelligence and have the speed of trust, for example -- many managers still don't know HOW to lead as well as they could,'' says Sonsino.

One of the report's key recommendations for managers is to seek out tangible, step-by-step leadership training in building support and overcoming resistance inside companies. Many business schools and consultancies focus on stories about inspirational leaders, such as Jack Welch, Gandhi and Mother Teresa. This may boost senior executives' aspirations to lead well, but it doesn't help them with their day-to-day business development challenges.

The report also offers a warning for human resource directors and training providers. Put on an array of leadership development programmes, suggest the authors, and balance inspirational leadership courses with the practical. Without this balance, firms risk crushing the life out of productivity and performance.

In conclusion, leadership really will die, say the authors, unless executives and managers show the courage to overcome their frustration and take effective leadership action. ''Business managers must rise to the challenge and accept the responsibility to lead. They can be good leaders, even in these difficult times. But this in turn depends on the availability of serious professional leadership training and coaching that deals with the critical interpersonal skills of overcoming resistance and building support.''

'The Death of Leadership' draws mainly on responses to two electronic surveys (conducted in March 2007 and May 2008) of clients and subscribers of Moore Sonsino Limited from all over the world. The report also incorporates follow-up interview data and secondary research drawn from the bestselling book 'The Seven Failings of Really Useless Leaders'.

Here are details of the core survey samples:
Survey Date: March 2007
Survey of 533 managers around the world
Responses from 102 managers
Response rate: 19.1%

Steven Sonsino is an author and international leadership speaker. He is a Fellow in the Centre for Management Development at London Business School and a visiting professor at other business schools.

Jacqueline Moore is an author and business writer. She was for 16 years a Senior Journalist and Columnist on the London Financial Times.

'The Seven Failings of Really Useless Leaders' is a business and management bestseller at Amazon.

Preventing the death of leadership - your 10-step prevention plan

Managers must take control of their leadership without becoming dictators, says Steven Sonsino in his Death of Leadership keynote speech