Now players of “the most happening instrument on the planet” can improve their ukulele skill with one-on-one guidance from Steve McNie, one of the instrument’s most respected coaches. His new site, daifukulele.com offers online ukulele lessons to anyone, anywhere in the world by Skype. 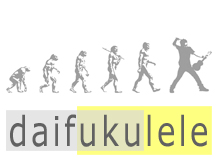 We help ukulele players evolve faster. Get your strum on - no matter where you live.

That every second TV commercial features one in its soundtrack reflects a massive surge in the ukulele’s popularity. It is heard frequently on pop recordings. It’s all over YouTube - and it was one of Christmas’ most requested gifts. Its global community is bursting at the seams with players of all ages, walks of life, tastes in music and degrees of musical experience. Ukesters have their own star system, media network and a complex supply chain that is struggling to keep up with booming demand.

For as much as the uke is easy to learn, it is also easy to learn bad playing habits. Daifukulele presents live one-on-one private online ukulele lessons, coaching and clinics for ukulele players of all levels to improve their skills quickly by Skype, no matter where they live.

Steve McNie’s strengths are the ones that percolate mainly behind the scenes: producing, coaching, marketing and organizing. He is the force behind the Corktown Ukulele Jam at the epicenter of Toronto’s thriving uke scene.

Now, no matter where they live, uke players can work one-on-one with Steve to improve their skills through online ukulele lessons.

"I was contacted about a Skype lesson several months ago by an enthusiastic player in Austin, Texas who’d heard about our work in Toronto," says McNie. "The connection was fluid and we both adapted instantly to the platform. It went remarkably well and I’ve participated in several since with students spanning the globe. I'm constantly amazed by the quality of the experience. I’m a detailed instructor and Skype is a perfect space for this kind of engagement."

“DAIFUKULELE”
McNie explains that daifuku means "big fun and huge luck" in Japanese. Add "lele" and a new word emerges to represent the elevated state of well-being that comes from playing the uke.

"We’re pretty earnest about tapping the uke’s built-in fun and whimsy with the integration of good playing practices.” observes McNie. "Serious players get the same benefit from a flight of weekly lessons that any musician would on any instrument, but people are requesting one-offs to address specific challenges… a song or a specific strum someone wants to learn. The thing I hear most? Pain and tension. Because it's so easy to learn, uke players develop bad habits that don't present as obstacles until later. I deal with this across all skill levels, but the sooner one gets an experienced intro, the better."

Daifukulele chose Bookfresh for online appointment management because of their solid market reputation and straightforward, intuitive interface. The process is easy with just the right amount of handholding leading up to your session so that you'll know what you need to do.

ABOUT DAIFUKULELE
daifukulele.com | torontoUKES.com | UKOPOLIS.com
Daifukulele is the most recent addition to a family of music-based enterprises established by Toronto ukulele impresario, Stephen McNie to provide high quality, one-on-one ukulele coaching and online ukulele lessons, live in real-time by Skype. McNie runs Toronto’s popular Corktown Ukulele Jam that has grown to over 1,200 members in 3 years.

Steve McNie produces the Corktown Ukulele Jam at the epicenter of Toronto's thriving uke scene. He's big on style, groove, feel and form.
His insightful teaching has inspired hundreds to play better and progress faster at any skill level. His highly acclaimed ukulele workshops, clinics and private teaching have inspired hundreds to play better and progress faster. Toronto schools like Havergal College, University of Toronto Schools, St. Clement’s and the Mabin School have all recently engaged Steve to introduce the ukulele to their music and extra-curricular programs. Always fun and reflective of the ukulele's inherent whimsy, Steve balances playing and singing with ear training, relevant theory, rhythm and choral sense from charts, notation and by ear.

It is to the cello (University of Toronto and Royal Conservatory of Music), and particularly to mentor/cellist Daniel Domb that Steve attributes much of his sense for music. He is a founding member of the Corktown Chamber Orchestra and plays bass and accordion in The McFlies.