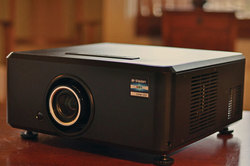 Digital Projection Inc., the only Emmy® Award-winning manufacturer of high performance projection systems, unveiled their M-Vision Cine LED projector at the recent CEDIA Expo in Atlanta, Georgia. With an estimated lifespan of more than 60,000 hours, the Cine LED delivers a Lifetime Illumination™ projector solution to both home cinema and commercial AV channels. Available in both zoom and fixed lens configurations, the M-Vision Cine LED delivers a precision projector solution capable of running a remarkable eight hours a day for over 20 years. When compared to commonly used UHP lamp-based projectors, the M-Vision Cine LED marks a new standard in environmental responsibility with no lamp replacement, low wattage consumption and prodigious lifespan.

Home Theater Magazine (HTM) conducted rigorous lab tests using the M-Vision’s 1.56-1.86 lens configuration. Using a 100” Stewart Filmscreen StudioTek 100 screen, the Cine LED was set up at a throw distance of 142 inches. Testing occurred in HTM’s professional lab using the Spears & Munsil High Definition Benchmark Blu-ray Edition test disc, as well as the HQV Benchmark Blu-ray test disc. According to the Home Theater reviewers, both discs produced “virtually no sign of rolloff at the highest resolution,” with excellent 2:2 and 3:2 deinterlacing. In summary, after both viewing test discs and Blu-ray movies, the M-Vision Cine LED’s image detail was deemed “impeccable,” while its colors were “rich but natural.” HTM’s April issue is now available through newsstands across the country, and can also be purchased from their website, hometheatermag.com/.

Sound & Vision Magazine (SVM) also conducted their review with a 1.56-1.86 lens configuration, but on a slightly smaller 80” Stewart Filmscreen StudioTek 100 screen. Brent Butterworth, contributing technical editor for SVM, chose to begin the review by analyzing where LED technology fits into the current projector timeline. Butterworth’s analysis is a valuable resource for those seeking perspective on how LED-based projection will change the AV industry. In regards to performance, Butterworth remarked that he was “witnessing a minor miracle: a new video-display technology that looked really good from its inception.” Butterworth continued that, when compared to the typical UHP projector performance, “in certain ways the LED-driven picture actually looked better than what I’m used to seeing.” Closing review remarks note, “This first-generation projector performs beautifully, and it should keep on performing beautifully day in and day out for many years to come.” SVM’s April/May issue will be available within the next few weeks, but the full review can be read online by clicking here.

The first to review the M-Vision Cine LED was Scott Wilkinson of both UltimateAVmag.com and Home Theater Magazine. Wilkinson conducted his review, which was later expanded into the HTM review mentioned above, using the M-Vision’s 1.56-1.86 lens configuration and 100” Stewart Filmscreen StudioTek 100 screen. In his “Real World Performance” section, Wilkinson analyzed the LED’s performance against key demo clips that focus on specific projector performance points. Wilkinson advised, “The opening below-deck shots seen shortly after the beginning of Master & Commander offer a great test of shadow detail, and as expected, the Cine LED's performance in this regard was exemplary.” When viewing a select scene in Contact, Wilkinson described the colors as “beautifully natural, including skin tones.” Wilkinson’s closing summary concluded, “After spending some time with this projector, I'm convinced that LED illumination is a viable alternative to conventional lamps, offering many advantages and few drawbacks.” The full UltimateAVmag.com review can be read by clicking here.

George Walter, Digital Projection’s Vice President of Home Cinema, commented, "We are thrilled that the new M-Vision Cine LED has been received so positively, and we greatly appreciate the time that each reviewer spent analyzing its vast capabilities.” Walter continued, “With exceptional contrast and color dynamics at an incredibly affordable price point, the Cine LED introduces a new era of precision performance and efficiency to home entertainment enthusiasts worldwide.”

Emmy® is a registered trademark of The Academy of Television Arts and Sciences.

About Digital Projection International
Founded in 1989, Digital Projection International (DPI) has been instrumental in the development and application of Digital Light Processing™ technology by Texas Instruments for projection systems. DPI introduced the world’s first 3-chip DLP® projector in 1997, and has since delivered expert system engineering and world-class customer services, thus maintaining its position as a digital imaging pioneer.

DPI’s groundbreaking projection research and development has garnered the admiration of industry professionals around the world. This has earned the company many awards, including two Emmy® Awards for Outstanding Achievement in Engineering Development by the Academy of Television Arts and Sciences. DPI remains the first and only projector manufacturer to win the coveted award.