New book captivates readers with an insightful story of love, blood and power. 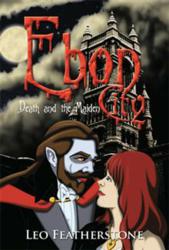 The rise of vampire movies and novels in the market has indeed     left a significant impact on young teenagers of today. In line with this, author Leo Featherstone shares an exciting and highly compelling vampire tale that will indeed etch an indelible mark on its readers’ subconscious. Ebon City shares a story of romance, survival and the soul’s eternal search for its true identity.

The vampire Ezekiel has lived for over four hundred years and has spent most of that time satiating his bloodlust by killing evildoers. Plagued with the deaths he’s caused and tormented by his vampire kin, Ezekiel travels the world and surrounds himself with art and theatre to distract himself from his infernal existence.

Settling in the gothic city of Ebon, he meets an inexperienced psychic named Angela Thorn who possesses destructive magic beyond her control. Feeling sympathy for the tormented young woman, Ezekiel takes her under his wing and teaches her how to control her powers so that she does not harm those around her. Romance ignites between them, and Angela discovers Ezekiel’s true nature as a vampire. This revelation brings misfortune down on their friends and family as Ezekiel’s fellow vampires gather in Ebon City to punish him for exposing their secrets.

Highlighting the value of romance as the road towards fulfillment, this work of fiction also warns its readers about the contradictions of the damsel/ hero dynamics. Giving an invigorating perspective, Ebon City work features the transition of roles where a seemingly inferior character can reach his full potential through taking responsibility for oneself not as a weaker entity, but as an equal and able partner in the relationship.

Born in 1984 and raised in New Jersey, Leo Featherstone earned a BA in English and an MA in museum communication. He works as a freelance bookkeeper and archivist in addition to writing fantasy and horror. He spent his childhood daydreaming of magic, heroes, and monsters. His love of writing developed gradually, as did the skeletons of various stories he hoped to write someday. The conception of his first book occurred in his junior year of high school when he arbitrarily sketched a vampire in art class one day. This initial drawing sparked his imagination and led him to write a rough outline for his first horror narrative. It wasn’t until he graduated from college that he finally sat down and fleshed his story out into a full novel.