Award winning music producer Andrew Lane, and Pop Singer Macy Kate, have teamed up to write and master a beautiful ballad for 10 year old Lexi Haas; a little angel who is battling a neurological condition known as Kernicterus. 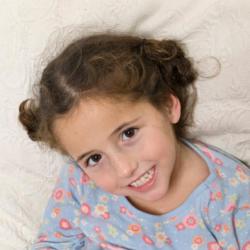 Always stay inspired, and always believe in yourself

Lexi Haas is just like any other 10 year old girl from Charlotte, North Carolina. She loves animals, ballet, basketball, board games, Harry Potter, and spending time with her family and friends. Lexi has an incredibly intelligent mind, and her personality and love of life, make it impossible not to smile and feel warmth when you are in her presence.

There is one thing that makes little Lexi a bit different from her peers. When Lexi was born, her parents noticed bruising on her face, and a darkening of her skin immediately following her birth. This condition is known as newborn Jaundice which is the yellowing of a baby’s skin from the build up of a chemical called bilirubin. Lexi was put under an oxygen tent to assist her breathing during the first 24 hours after her birth, however was released shortly after without further testing. The medical condition that Lexi is currently living with today is called Kernicterus, which was a result of her untreated Jaundice.

Lexi is currently participating in a study on Kernicterus at UCLA medical center in Southern California, where doctors and medical experts are researching cures for this condition.

A few weeks ago, award winning music producer Andrew Lane, who is best known for producing platinum selling albums that include the Hannah Montana Soundtrack, the High School Musical Soundtrack, Toni Braxton, Backstreet Boys, and Mary J Blige, was contacted by one of Lexi’s family friends via Facebook, and asked to take a look Lexi’s website and video. “When I saw that video it was just amazing”, said Lane. “It brings tears to your eyes”. When we asked why he decided to support this cause over the many other charities he is approached by daily, he responded by saying; “She needed a voice to let everybody know how special she was, and what a light she is to the world.”

Andrew Lane collaborated with 14 year Pop Artist, Macy Kate, to produce and co write a beautiful original ballad which will be presented to Lexi and her family at his Burbank studio on Saturday October 27th, 2012 at 6:00pm PST. This is a surprise event that Lexi and her family have very little details on.

This new single that is being dedicated to Lexi, will be released on ITunes in the next few weeks, in effort to raise money that will help support the research of Kernicterus, and provide Lexi the treatment she deserves. Macy Kate’s message to Lexi is to “ always stay inspired, and always believe in yourself”. Lane’s message to Lexi is “ We love you, and we appreciate you”.

For additional information on the October 27th event, or to schedule an interview Macy Kate or Andrew Lane, please contact Dani Thompson at 714-496-5152 or by e-mail at danithompson(at)dntagency(dot)com. Press coverage at this event is requested and encouraged to help raise awareness to mothers with newborns on this preventable condition that Lexi is facing.Thank you for your support.