As The Clocks Change, New Technology Brings Relief for the Millions of UK Winter Blues Sufferers

Winter Blues and SAD affect a quarter of the population once the clocks go back, meaning months of depression for millions. Light therapy can treat 85% of cases, but the bulky lamps used to treat it put people off the treatment. New LED technology makes light therapy more accessible, bringing relief to the millions of SAD sufferers across the country. This weekend's change of the clocks needn't be that trigger to depression as now there is a clinically proven, high-tech therapeutic option available in the UK. 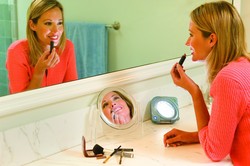 LED SAD lights make getting light into a routine easy

When the clocks go back on 31st October, a quarter of the UK will start suffering from seasonal depression. Seasonal Affective Disorder (SAD) affects 7% of British people, while a further 17% experience its milder form, Winter Blues. It is caused by a lack of sunlight during the winter – light that the body relies on to function correctly.

Light therapy, a treatment created specifically for SAD, is effective in treating 85% of cases. The treatment is not without its drawbacks however; SAD lamps are a similar size to a computer screen, and need to be looked directly into for up to an hour every morning. Fortunately, new technology is making light therapy faster, more effective, and much more convenient.

SAD lamps have previously used fluorescent bulbs to create the bright light the body needs. Fluorescent bulbs are large, emit harmful UV radiation and are also expensive to run off mains power. New SAD lamps are becoming available, such as the Litebook Elite, which use LEDs to create their light. This makes them much smaller, more convenient, cheaper to run and, because the light produced matches the peak wavelengths of sunlight, cut the usage time down to as little as 15 minutes. And unlike any traditional wired boxes, this ground-breaking LED technology is so efficient, it can be run off the lamp's built-in rechargeable battery, making it a unique, portable therapeutic device.

SAD is caused by a lack of sunlight; the body uses sunlight as a trigger for several functions. The key to SAD is the production of two chemicals; serotonin and melatonin. Serotonin is produced when the body receives sunlight, and is linked with a feeling of well-being. Melatonin is the opposite; it is a hormone used to prepare the body for and during sleep. Sunlight is the body's cue to stop producing melatonin. During the winter, where sunlight is limited, the body does not receive this cue when it should, leaving you feeling down, tired and lacking energy.

SAD lights provide light bright enough to trick the body into thinking it is daylight. During the winter, not only is there less sunlight anyway, but often the sun is yet to rise when we arrive at work and has gone down by the time we leave, meaning we receive almost no sunlight at all. SAD lamps provide enough light for the body to acknowledge that it needs to produce serotonin and stop producing melatonin, and leave you feeling your regular self.

It is worth noting that many LED light boxes use blue LEDs. It has been suggested that blue light has negative health side effects and many studies have been conducted on this subject. Some have shown the blue light can be toxic to human retinal structures, so it is important to ensure that any LED SAD lamp purchased uses white LEDs rather than blue, to ensure that it is safe to use. Only white LEDs have been clinically proven to be both safe and effective.

For more information about Seasonal Affective Disorder, Winter Blues and light therapy, visit the newly-launched http://www.litebook.co.uk website. It has information, advice and a wealth of clinical research, as well as a forum for SAD sufferers to interact with others with the condition and share experiences and tips with.

LEDs emit no UV, making them safe for use for both adults and childrenChildren using light therapy while doing homework

Original PDF of this press release