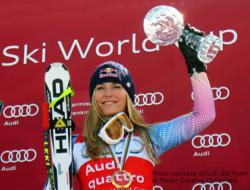 Lasting depression treatment involves rediscovering purpose in our lives, not just treating symptoms. A relationship with God can provide that purpose for some people.

"'I'm not crazy-- even Lindsey Vonn has wrestled with depression!' When celebrities get honest about mental illness, the rest of us are more willing to talk about our own problems," says followme.org.

Vonn, who is the most decorated skier in US history, tells People Magazine, "Everything about my life seemed so perfect to people. But I struggle like everyone else."

The confession comes as news to fans of 28-year-old Vonn. To her fans, Vonn was a happily-married, successful Olympian and World Cup champion. Yet, since 2002, Vonn has battled the invisible enemy of depression, according to a Friday Christian Post report.

During that dark season, she says she "couldn't get out of bed anymore. I felt hopeless, empty, like a zombie," Vonn tells People. It was during this time that Vonn filed for divorce from her husband, longtime coach and manager, Thomas Vonn.

Yet, four years later, Vonn says she has managed to conquer the ghosts of depression. "I feel like I just needed to get everything off my chest," she tells People.

"All the parts of my life are finally in sync. I accept who I am, and I'm moving forward," she says.

What is the secret to overcoming depression once and for all? Start on the inside, says followme.org, one non-profit committed to helping individuals deal with depression, anxiety, and mental illness.

"I admire Vonn's willingness to speak openly about her battles with depression over the years. Her story shows that pumping our lives full of money, success, and fame only puts a band-aid on the wound of depression. Healing comes from a sincere look at the heart," says Pastor Jamie of followme.org.

"Lasting depression treatment involves rediscovering purpose in our lives, not just treating symptoms. A relationship with God can provide that purpose for some people," he says.

The National Institute of Mental Health estimates that over 20 million Americans wrestle with mood disorders like major depressive disorder, dysthymic disorder, and bipolar disorder, according to the Christian Post report.

Meanwhile, Vonn on Monday announced that she will take an "indefinite break from competition," according to SkiRacing.com, a winter sports news journal. The break, however, is the result of a recent intestinal infection-- not her battle with depression, Vonn assured fans on her website.

"I want to be emphatic that this has nothing to do with my recent interview with People Magazine. I had completed that interview weeks before I was in the hospital with the intestinal infection," she writes.

Vonn's interview with People Magazine is featured in the December 14, 2012 issue.