Rob Bell to Appear at a Livestream Event July 24 Marking the Paperback Publication of New York Times Bestseller 'Love Wins,' and the Repackaging of His Collected Works

Rob Bell will appear in Los Angeles at The Viper Room on July 24 at 7:00 pm PST to mark the paperback publication of his New York Times best selling book, Love Wins. The event, “Still Painting: An Evening with Rob Bell” to be Livestreamed will also celebrate Rob’s collected works, which have been redesigned and repackaged by HarperOne, available as well on July 24, 2012. The titles include: Velvet Elvis, Sex God, Jesus Wants to Save Christians, and Drops Like Stars. Also available for a limited time is a free ebook, The Rob Bell Reader, which includes chapters of each of his books. 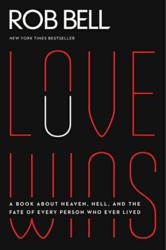 LOVE WINS: A Book About Heaven, Hell, and the Fate of Every Person Who Ever Lived by Rob Bell

Does it really make sense that God is a loving, kind, compassionate God who wants to know people in a personal way, but if they reject this relationship with Jesus, they will be sent to hell where God will eternally punish them forever?

“Still Painting” is a night of storytelling with Rob Bell. Many people have asked him “What’s next?” Rob will answer this question with stories. He may talk about the time he dressed up like a sheriff and it backfired. Or maybe the time he had a brain infection. Or an anecdote from writing Velvet Elvis. Or, possibly, he’ll share how sitting next to a stranger at dinner changed the direction of his life. He loves to tell these stories because they’re humiliating and painful and funny. These are the moments when it appeared that everything had fallen apart. The moments when he thought he’d lost all control.

What he learned is that these moments not only belong in daily life, but they’re absolutely necessary for people to become who they truly are. And so they hunt and explore and discover. It’s all just part of it. They have to keep painting.

Visit TicketWeb.com for tickets and information for the Viper Room event: http://www.ticketweb.com/t3/sale/SaleEventDetail?dispatch=loadSelectionData&eventId=4760755&pl=laviper

LOVE WINS
A Book About Heaven, Hell and the Fate of Every Person Who Ever Lived
by Rob Bell

When Love Wins was first published in the spring of 2011, it incited a firestorm of reaction from the faith community and provoked an international response. The controversial new book about heaven and hell became an instant must-read, spending 24 weeks on the New York Times best seller list. A video trailer of Rob Bell discussing Love Wins went viral, garnering hundreds of thousands of views and reaction from all over the globe. The publication of Love Wins inspired at least half a dozen books in reaction to the controversy, as well as many reviews, blogs, and church discussions. Rob Bell was catapulted into the center of the zeitgeist and TIME Magazine named him as one of their 100 most influential people of the year. Now, the incendiary best seller will be released in paperback to go on sale July 24, 2012.

Rob Bell, the bestselling author of Velvet Elvis and the 2 million-plus selling Nooma videos, touched upon a secret deep in the heart of millions of Christians who don’t believe what they have been taught are the essential truths of their faith. Bell brought out to the open the questions on everyone’s mind: Does it really make sense that God is a loving, kind, compassionate God who wants to know people in a personal way, but if they reject this relationship with Jesus, they will be sent to hell where God will eternally punish them forever?

Bell’s first book offers original and refreshingly personal perspectives on what Christianity is truly all about in Velvet Elvis. A vibrant voice for a new generation of Christians—the most recognizable Christian leader among young adults—Rob Bell inspires readers to take a fresh look at traditional questions of faith.

Sex God is an enlightening exploration of sexuality and spirituality. With profound beauty and insight, Bell addresses the truism that we can’t talk about ourselves as sexual beings without asking who made us that way. For progressive Christians and readers who enjoy the writings of Donald Miller, N.T. Wrighter, Brian McLaren and Timothy Keller, Rob Bell is a pioneer among those seeking a new kind of Christian teaching.

In Jesus Wants to Save Christians, Rob Bell joins with Don Golden, Christian activist and vice president of World Relief, to call upon the church to break from its cultural captivity and challenge the assumptions of the American Empire. Anyone who has ever questioned his faith, or is one of those looking for answers that may not be found in his own church’s standard teachings, will discover a new creed in Bell and Golden’s provocative and spiritually enlightening work.

In Drops Like Stars, Rob Bell explores the complex relationship between suffering and creativity. Bell suggests that art can be found in the agony of our lives. Readers will find true enlightenment in this thoughtful and engaging book from this vibrant, progressive voice for a new generation of Christians.

ROB BELL is a bestselling author and international teacher and speaker. His books include Velvet Elvis, Sex God, Jesus Wants to Save Christians, and Drops Like Stars, and he was profiled in TIME magazine as one of 2011’s hundred most influential people. He and his wife, Kristen, have three children.

Praise for Rob Bell and his books:

“Love Wins has ignited a new holy war in Christian circles and beyond.” — TIME Magazine

“…[O]ne of the country’s most influential… pastors, challenging traditional Christian views of heaven, hell and eternal damnation, has created an uproar among evangelical leaders.” — The New York Times

“Time and again, Bell challenges the reader to be open to surprise, mystery and all of the unanswerables contained within the ‘wide stream’ called Christianity. — Christian Century