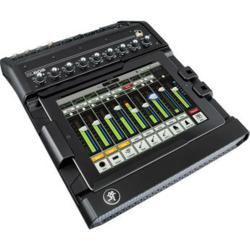 B&H Pro Audio is pleased to share with the audio community the release of the Mackie DL806 8-Channel Digital Mixer with iPad Control allows the entire process of live-sound mixing to be controlled by an iPad.

Control the Mix From Anywhere
With the Mackie DL806's seamless wired to wireless mixing capabilities, you can mix in real-time from anywhere in the venue on your iPad (requires wireless router, sold separately). Instantly adjust mix functions from tuning front of house trouble spots to ringing out stage monitors.

Big on Security
The Mackie DL806 is big on security. The PadLock feature locks down your iPad for permanent installs, while the Kensington lock -- the industry standard in protecting technological equipment -- secures the mixer to guard it from theft.

About B&H Photo Video
As the world's largest source of photography, video and audio equipment, B&H Photo-Video is known worldwide for their attentive, knowledgeable sales force, and excellent customer service, including fast, reliable shipping. Visitors to the website can access a variety of enlightening articles and educational videos. B&H has been satisfying customers worldwide for close to 40 years.