Maigc Rivers Rafting Company of West Forks, Maine has purchased the Kennebec River rafting business of New England Outdoor Center, based in Millinocket, Maine. The purchase will allow NEOC to concentrate its efforts on the Penobscot River and Magic Rivers to focus on the Kennebec and Dead Rivers. 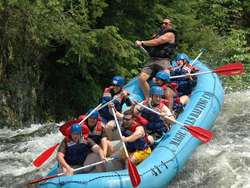 We have chosen to sell our Kennebec Valley operations to Magic Rivers because of Dave Neddeau's long-standing commitment to providing a quality experience for his guests on the Kennebec and Dead Rivers.

To focus its rafting and outdoor adventure operations on the Penobscot River in Maine's Katahdin region, New England Outdoor Center of Millinocket, Maine has sold its Kennebec and Dead River rafting business to Magic Rivers Rafting Co., owned and operated by David Neddeau of Winslow, Maine. David's wife, Donna, is the owner of Magic Falls Rafting Co. based in West Forks, Maine. The sale of rafts and gear and transfer of river allocations was completed on June First as lawfully allowed by Maine's Whitewater Statutes.

In 1995, the Neddeaus purchased the base lodge, farmhouse and shower house alongside the Dead River from Matt Polstein, owner of New England Whitewater Center. Polstein established a new rafting complex, the Osprey Center, alongside the Kennebec River in Caratunk and changed the business name to New England Outdoor Center. In 1996, New England Outdoor Center moved its base of operations to Millinocket with the development of the Rice Farm property and purchase of Twin Pine Camps.

Magic Falls Rafting Co, established in 1989, has purchased Kennebec River allocations over the past twenty years from Eastern River Expeditions, Voyagers Whitewater and Wilderness Expeditions. The company has grown from a small outfitter with two rafts and a van to a major outfitter with 60 rafts, a base facility with campground, inn and lodge with king, queen and bunk rooms, recreation pavilion and the area's only outdoor climbing wall. Magic Falls annually carries over 6,000 passengers on the Kennebec and Dead Rivers.

Says New England Outdoor Center owner Matt Polstein, "We have chosen to sell our Kennebec Valley operations to Magic Rivers because of Dave Neddeau's long-standing commitment to providing a quality experience for his guests on the Kennebec and Dead Rivers."