To celebrate the occurrence of Manhattanhenge, a breathtaking solar event, Stonehenge Partners is hosting a celebration in the streets of Times Square. The event begins at 7:00 p.m. on Tuesday, July 12th at 235 West 48th Street with a ceremonial procession through Times Square. 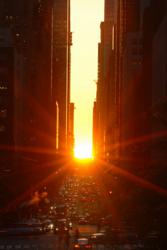 Manhattanhenge is a semi-annual occurrence in which the setting sun aligns with the east–west streets of the Manhattan grid. The term "Manhattanhenge" is derived from the historical and mysterious structure in England where the sun aligns on each of the solstices.

In celebration of this year's natural phenomenon, Stonehenge is hosting a photo contest for the image that best captures Manhattanhenge which will occur at 8:25 p.m. Stonehenge recommends participants to shoot their photos from 42nd street facing west.

Pedestrians, visitors, and the Times Square community are invited to participate and enter the photo contest where Stonehenge will award the most voted picture with a $500 Apple gift card.

Contestants are invited to send their best photos of Manhattanhenge to contest(at)StonehengeNYC(dot)com by July 15th, 2011. The images will be posted by July 18th and voted for on the Stonehenge facebook page, http://www.facebook.com/StonehengeNYC.

Founded in the early 1990’s by Ofer Yardeni and Joel Seiden, Stonehenge is a fully integrated New York City-based real estate company that owns and manages an 18 property portfolio comprised of approximately 2,500 residential units and 700,000 square feet of commercial, retail and garage space.