Steel for the Margaret Hunt Hill Bridge Has Arrived

Two of the largest and most highly anticipated pieces of steel for the Santiago Calatrava-designed bridge arrived in Dallas. The pieces, which weigh 100,000 pounds each, are part of the distinctive arch feature and centerpiece of the Margaret Hunt Hill Bridge that will span the Trinity River Corridor. 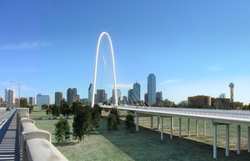 The Margaret Hunt Hill Bridge is now under construction in Dallas.

The future of Dallas' skyline is coming together, 36 feet and 50 tons at a time.

Two of the largest and most highly anticipated pieces of steel for the Margaret Hunt Hill Bridge arrived in Dallas. The pieces, which weigh 100,000 pounds each, are part of the distinctive arch feature and centerpiece of the Santiago Calatrava-designed bridge that will span the Trinity River Corridor. The bridge is currently under construction, and with the arrival of each piece, the suspense builds toward the unveiling of North Texas' next landmark.

This project is a collaborative effort by the City of Dallas, the Texas Department of Transportation, U. S. Army Corps of Engineers, Williams Bros., and J. D. Abrams Inc.

On a picture perfect Saturday morning, two trucks from Daily Trucking Company and a few dozen construction workers helped to unload the massive pieces for the bridge. Each cylinder stretches 36 feet long and measures 17 feet across. A 600-ton crane lifted the two cylinders from the Continental Bridge and down into the corridor. This gleaming white steel will be used for the world-class bridge's central arch, which will reach 400 feet high upon completion. Pieces of the arch could begin being hoisted into place by the end of the year. Other elements include a 1,200-foot long span with miles of cable holding the bridge span in place.

The Margaret Hunt Hill Bridge is the first vehicular bridge designed by Calatrava in the United States. The bridge will eventually connect Singleton Boulevard in West Dallas across the Trinity River to Woodall Rodgers (Spur 366) in downtown Dallas. Once built, the bridge will become Dallas' signature landmark for The Trinity project and will replace the Continental Bridge, which will serve as the pedestrian bridge. A second Calatrava Bridge--the Margaret McDermott Bridge--will start construction at a later date.

To celebrate the progress to date, The Trinity Trust Foundation will host "Bridging the Trinity" on the Continental Bridge on Friday, September 25, 2009 at 7:30 p.m. Joining Santiago Calatrava will be Dallas Mayor Tom Leppert and the National Honorary Chairs U.S. Senator Kay Bailey Hutchison and Congresswoman Eddie Bernice Johnson. Honorary Event Chairs are Mary McDermott Cook, Lyda Hill, Al Hill Jr. and Alinda Wikert. Lynn McBee is the Event Chair, and Christy Berry is the Host Committee Chair. More information can be found at [Bridging the Trinity __title_ Click this link.].

A $2 billion public works project, The Trinity project is one of the largest urban developments in the nation stretching 20 miles through Dallas and encompassing 10,000 acres. Plans include a meandering river, downtown lakes, an island, wetlands, hike and bike trails, a whitewater course, riding paths and nature walks through the Great Trinity Forest. The Trinity River Audubon Center is already completed.

To watch the bridge being built, visit Trinity River Corridor.

Steel photos are available upon request or by visiting these sites:
http://www.facebook.com/pages/The-Trinity-Trust/122873867408
More photos
http://twitpic.com/by4cy

Steel b-roll is available upon request.