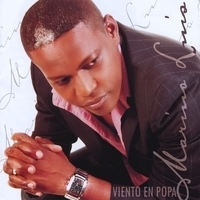 From the intensity and vigor with which salsa crooner Marino Luis belts out harmonies on his latest project 'Viento en Popa,' one would think he was vying for a shot in the spotlight. But, in reality, he's been there for a while.

A former backup singer for world renowned salsa legend Yuri Buenaventura, Luis has been leaving his musical mark for decades. With his second album, 'Viento en Popa,' the songster graduates from vocalist to producer, having orchestrated musical arrangements for 10 of the CD's 12 tracks.

In creating 'Viento en Popa,' Luis drew from his multitude of experience as a salsa musician and songwriter in order to craft a wide-ranging yet musically thorough album. Well represented on the disc is the tropical, classic salsa of Colombia's Pacific coast for which Luis is widely known; but "Viento en Popa' reaches across musical aisles to borrow sounds from close genres like bachata, bolero, and even reggaeton.

Everyday life influenced Luis to assemble the collection of singles found on 'Viento en Popa.' While many salsa compilations rotate around the universal themes of love lost and love found, 'Viento en Popa' explores beyond such topics to touch a far-reaching audience with 'Obama: El Cambio,' 'Mi Lindo Regalo,' and other singles.

Not only did Luis lend his vocal and production skills to his latest album, he is also responsible for writing six of the CD's tracks. While 'Viento en Popa' is only Luis' second solo disc, he has already garnered a strong following in his native Buenaventura, Colombia as well as Spain and the United States. Thanks to more than 10 years of touring worldwide with first-rate salsa groups, Luis' ripened musical talents are on full display throughout 'Viento en Popa.'

Produced by Washington, DC-based Acuario Productions, 'Viento en Popa' has already been hailed as a hit with listeners in Cali and Buenaventura, Colombia, up and down the east coast of the United States, various cities in Europe, and salsa hotspots through Latin America. A tour is in the works and is projected to kick-off in early fall 2009 with stops in North and South America as well as Europe.

About Marino Luis
As a child in his native Buenaventura, Colombia, Marino Luis' greatest musical influence was his grandfather, a talented Marima folkloric musician, singer, and composer. At the age of seven, Luis began playing the guitar with the support and encouragement of his parents who recognized an undeniable ability and love of music.

During adolescence, Luis and his brothers formed a musical group, which served as a singing foundation and practice for much bigger things to come. After moving to Bogota for university studies, Luis returned to Colombia's Pacific coast to re-energize his musical career, teaming up with groups such as Orquesta Sandunga and Suprema Corte. Famed musical maestro Andres Viafara plucked Luis from a crowd of talented musicians to become his disciple, on whom he imparted his musical knowledge. Thus began Luis' ascent in the music industry within Colombia, a country lauded worldwide for its rich musical history and responsible for producing many of Salsa's greatest legends.

Today, Luis is one of the most recognizable and celebrated voices in Colombia's Pacific region. During his career, he's toured worldwide with some of Salsa's biggest names, gaining fame and an ever-expanding fan-base along the way. He's currently represented by US-based Acuario Productions under whom he released his debut album in 2006 as well as his latest record.

In addition to representing artists, Acuario Productions specializes in parties, events, and concerts. The six-year-old company has steadily developed a reputation throughout the District of Columbia, Maryland, and Virginia metro areas as the premier salsa music network. With weekly events and parties, Acuario Productions draws upon its hundreds of devotees and supporters as a fan base for promoting local and international musical artists.

Together with such artists as Marino Luis, Acuario Productions is on its way to creating bigger and even more enjoyable international projects.