Maritime Lawyer Launches Petition Drive to Save US Maritime Jobs

Maritime attorney, Steve Gordon, announces the launch of an online petition drive to help save jobs of U.S. mariners. 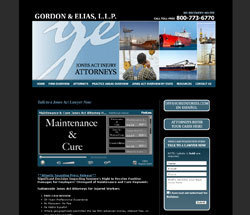 U.S. companies are taking advantage of loopholes to hire foreign workers, who get paid a pittance compared to U.S. workers. We're in the worst economic situation since the Great Depression and qualified U.S. mariners are being displaced. Something has to be done. It's just not right

Maritime lawyer, Steve Gordon, announces the launch of an online petition drive to help save jobs of U.S. mariners by putting pressure on federal officials to enforce the Jones Act and the Outer Continental Shelf Lands Act (OCSLA)

The Jones Act and Outer Continental Shelf Lands Act (OCSLA) were enacted by Congress and pertain to regulations affecting the oil and gas industry in the Gulf of Mexico. Provisions of the Jones Act were made to protect jobs for U.S. maritime workers and to require the transportation of goods between American ports and offshore facilities to be carried out by U.S. vessels (made in the U.S. and flagged by the U.S.). Although the OSCLA does not prohibit the use of foreign flagged vessels on the outer continental shelf, both of these laws require the employment of U.S. citizens or resident aliens on those vessels.

"U.S. companies are taking advantage of loopholes to hire foreign workers, who get paid a pittance compared to U.S. workers. We're in the worst economic situation since the Great Depression and qualified U.S. mariners are being displaced. Something has to be done. It's just not right," states Steve Gordon.(1)

About the online petition, Gordon states, 'interested parties can write their own message or sign on to a predrafted letter'(2). Gordon intends to send the message to federal officials including members of Congress, President Obama and Admiral Thad Allen, Commandant of the Coast Guard. 'More than 2,000 people have participated so far',(3) says Gordon.

There are provisions in these laws that allow for waivers or exemptions, such as in the event of a national emergency or disaster. Problems can arise when these waivers and exemptions go too far. Such is the case today for U.S. maritime workers and ships operating in the waters of the Gulf of Mexico.

A dispute has arisen with oil and gas industry companies using non-U.S. vessels and foreign crews. They suffered damage to their refineries and petroleum distribution network following the aftermath of Hurricane Katrina in August 2005. It was imperative that these facilities be repaired so the 'former U.S. Homeland Security Secretary, Michael Chertoff, waived Jones Act restrictions for 19 days for foreign vessels carrying oil and natural gas.'(4) The result was that it 'opened the door, critics say, to an increased foreign presence in the Gulf.'(5)

Steve Gordon, a renowned Houston maritime attorney, decided that something had to be done about it. He handles personal injury cases involving the Jones Act. His maritime law firm comes into contact with families that are adversely affected by this situation. In response, he has taken up this cause and developed an online petition at Jones Act Questions. The goal of the petition is to convince federal officials that it is in the best interest of the country to enforce the Jones Act and save U.S. jobs.

Gordon emphasizes that he's not making any money from it. His purpose is not to put a U.S. ship out there, then sue after a worker gets hurt. His maritime law firm, Gordon & Elias LLP, works with seamen and longshoremen from shores all over the country. The team of lawyers at Gordon & Elias LLP have decades of experience practicing federal maritime law and are able to provide clear legal advice to their clients.

Gordon has also provided some online information about this controversy. Visitors can read more about the Jones Act controversy. He has also published a series of Podcasts called 'A Moment with Jones' (available in the upper left part of the Jones Act Questions web page).

This story has also gotten some additional press coverage. In the article, 'U.S. mariners urge action against foreign offshore oil vessels', (Professional Mariner September, 2009, issue # 128), author Rich Miller goes into depth on this issue, citing in more detail the government agencies and regulations that are involved.

Here are some of the facts pointed out in Miller's article:

The original waiver granted by former U.S. Homeland Security Secretary Michael Chertoff was for only 19 days.

Currently, there are 'More than 30 foreign vessels are working in the Gulf with foreign crews.'(6)

Jones Act waivers are typically only granted in 'national emergencies like Katrina or in cases of strategic defense interest.'(7)

A waiver can be granted 'when a specialized vessel is needed and U.S. vessels can't meet the demand.'(9)

Miller also points out that 'the U.S.-flagged fleet can handle the needs of customers in the Gulf of Mexico and across the country if the Jones Act is enforced'(10), according to Ken Wells, president of the Offshore Marine Service Association (OMSA) in Harahan, LA.

Seamen who have lost their jobs or, alternatively were not hired because of a foreign vessel or seaman situation, contact maritime attorneys - Gordon and Elias.