In just a few short weeks, Matt Bacak has crossed the Facebook finish line with 5,000 Friends. By putting his own Internet marketing strategies into action, "The Powerful Promoter" has managed to break the social media networking barrier. Unfortunately for those Internet marketers who want to get connected to Bacak through Facebook, they're too late. 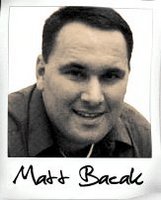 It's been an eye-opening experience to say the least. I only wish Facebook would allow its members 10,000 Friends. Should the day ever arrive that they raise the bar, you can bet I'll be among the first to aim for and achieve it.

"The Powerful Promoter," Matt Bacak, is pleased to announce that he has made the Facebook record books. In record-setting pace, he has garnered 5,000 Friends on the top social media networking site. Because Facebook sets this figure as the limit for its members, Bacak has taken his networking endeavor as far as he possibly can. Known throughout the Internet marketing community as "The Powerful Promoter," Bacak's Facebook Friends' list includes a who's who of the Internet marketing industry's elite. Jealous Internet marketers who would like to see who Bacak is connected with can do so by visiting his Facebook profile online at http://www.facebook.com/profile.php?id=675977989.

When Bacak's vast email contacts learned that they could get connected with such movers and shakers by becoming "The Powerful Promoter's" Facebook Friend, they jumped at the chance. Thus, Bacak reached the Facebook Friends limit faster than even he imagined.

"At first, I took on the quest for 5,000 Facebook Friends as a fun challenge. The more I got into it, however, the more I realized that I could leverage the game to my advantage," explains Bacak. As a result of the endeavor, I've not only widened my own networking circles, but I've also been able to teach other up-and-coming Internet marketers how to get connected to some of the industry's most notable players."

Matt Bacak continues, "It's been an eye-opening experience to say the least. I only wish Facebook would allow its members 10,000 Friends. Should the day ever arrive that they raise the bar, you can bet I'll be among the first to aim for and achieve it."

A social utility that helps people communicate more efficiently with their friends, family and coworkers, Facebook has risen to the top of social media networks since its inception just four years ago. Today, the company boasts more than 100 million active users, and according to comScore, a global Internet information provider, it is the fourth most-trafficked Web site in the world. Among all social media sites worldwide, it currently takes the top spot.

For more information on Matt Bacak's accomplishment of 5,000 Facebook Friends, contact Stephanie Bunn at (770) 271-1536. To learn some of the Internet marketing tactics that got him there, visit Bacak online at powerfulpromoter.com.