“The Balancing Act” airing on Lifetime Television features the ultimate Internet Marketing balancer Matt Bacak on an upcoming ‘My Money’ segment. On September 1st, 2010, host Beth Troutman will pick his brain on how to make money using the Internet … the real way. 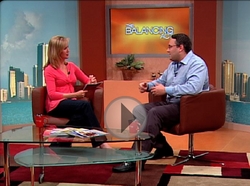 Rather than suffering, the business actually continued to thrive.

Fresh on the heels of his Internet Marketer of the Year win, IM guru Matt Bacak has been invited to appear on O2 Media’s popular daily morning talk show “The Balancing Act”, which airs on Lifetime Television. His segment, which will focus on how to make money using the Internet … the real way, will air on September 1, 2010 at 7:00am (EST). Viewers who miss out on the live broadcast can tune their Internet browsers to http://budurl.com/BalancingAct for another opportunity to learn from the money-making master.

According to the National Cable & Telecommunications Association, “Lifetime Television is the highest-rated women’s network.” Owned by A&E Television Networks, it is “currently seen in nearly 98 million households nationwide.” Its popular lineup includes the daily talk show “The Balancing Act,” which in response to viewer demand recently expanded to a full hour.

Airing every weekday morning from 7:00am to 8:00am (EST), “The Balancing Act” is America’s premier women’s morning show. In 2010 it earned 11 Telly Awards, which honor excellence in local, regional and cable TV commercials.

Dedicating a full 60 minutes to creating trusted solutions for women facing today’s greatest challenges, the show’s aim is to illuminate new ways for women to achieve success in all areas of their life. Each day, “The Balancing Act” devotes its segments to a particular theme, with Wednesdays focusing on “My Money.”

On Wednesday, September 1, 2010, host Beth Troutman will sit down with Internet Marketing Legend Matt Bacak for a candid, one-on-one discussion on how to make money using the Internet … the real way. In particular, she’ll pick his brain on the money-making strategies that recently earned him the Internet Marketer of the Year title.

“It’s been a whirlwind year, so far,” explains Bacak of the accomplishments that scored him the TV appearance. He’s quick to point out, however, “Last year, I made a conscious decision to put my family first and the business second. And then an interesting thing happened. Rather than suffering, the business actually continued to thrive. I live out ‘The Balancing Act’ every day in my real life, and I believe I have a lot of insight to offer Lifetime TV viewers on how to juggle one’s personal life and career.”

For more information on Bacak’s upcoming appearance on Lifetime Television’s “The Balancing Act,” visit http://www.thebalancingact.com/BA_video_player_embed_2009.swf?v=77TFTV6Q902040. To learn more about the achievements that landed him this coveted TV spot, contact Tamara Smith at (770) 623-3008 or visit him online at http://www.mattbacak.com/.

2010 Interent Marketer of the Year