From 45 Jersey Cows To One Of The Southeast’s Favorite Dairy Brands, Mayfield Dairy Farms Built On Quality 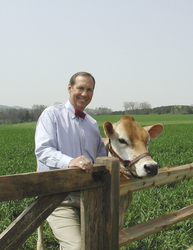 Back then, Jersey cows were known to produce the best-tasting milk, so that's what my grandfather chose. He made that first decision with quality in mind. And today, a hundred years later, that’s still the primary factor in every decision we make.

In 1910, when T.B. Mayfield decided to purchase 45 Jersey cows and begin delivering milk to his hometown of Athens, TN, he could not have imagined that he was launching what would become one of the Southeast’s leading dairy brands. Nor could he have realized how that particular decision would set a tone for the company which, Mayfield Dairy Farms leaders say, still guides it to this day.

“Back then, Jersey cows were known to produce the best-tasting milk, so that’s what my grandfather chose,” says Scottie Mayfield, the current Mayfield Dairy Farms President and the third generation of the Mayfield family to be involved in the business. “He made that first decision with quality in mind. And today, a hundred years later, that’s still the primary factor in every decision we make.”

Mr. Mayfield says that, even as his grandfather struggled to get his fledgling business off the ground, he kept one eye trained on quality, and the other firmly on innovations to help him deliver it. “He used spring water to cool the milk, which was not pasteurized at that time. And even in the early years, he was already planning the construction of the area’s first milk plant, which would allow him to produce top-quality milk in the quantities that people were demanding.”

In 1923, T. B. Mayfield put his plan to build a milk plant into motion when an opportunity to buy a small ice cream business presented itself. Using cream from his Jersey cows, Mayfield sold ice cream on the town square—and he sold a lot of it.

“Drawing from the success of his ice cream sales, my grandfather financed the construction of a more modern milk plant, which opened in 1924,” said Scottie Mayfield. “This was the first pasteurized milk plant between Chattanooga and Knoxville. After it opened, many local dairy farmers in the area came to my grandfather and asked if they could sell him their milk, and if he would service their home delivery routes.”

In the years following the untimely death of T.B. Mayfield in 1937, his sons,
Thomas B. Mayfield III and C. Scott Mayfield, Sr., took over operations of the dairy.

“When Uncle Tom and my father took over, the family was faced with the decision of how to grow the business,” said Scottie Mayfield. “My uncle went to the International Dairy Equipment Show to buy updated ice cream equipment so we could expand our ice cream business, which accounted for 80% of our sales.”

However, Tom Mayfield didn’t return to Athens with new ice cream equipment. Instead, he came home with a new plan for growing the business.

“While my uncle was at the dairy show, he learned that every large ice cream company there was planning to invest in their ice cream plants,” explained Scottie Mayfield. “So he felt we should build a new modern milk plant and focus on growing our milk business.”

The family agreed. In 1948, after mortgaging the family farm, Mayfield broke ground on what would become the most modern milk plant in the Southeast, equipped with the latest in advanced technology to bring the best milk and dairy products to customers.

After moving the company’s milk and ice cream production into the new facility, which opened in 1950, Tom Mayfield was at the 1955 International Dairy Equipment Show when he discovered a little-known piece of equipment that would again set Mayfield apart from the rest of the competition—then and now.

At the show, a New Zealand company introduced a machine called a Vacreator that was claimed to take unwanted feed flavors, such as onion, out of the raw milk—a problem all dairy plants struggled with in the springtime when cows would go back onto pastures to graze.

“Always mindful of putting quality first, Tom purchased the machine, which we now call the Aro-Vac Vacuum System,” said Scottie Mayfield. “Mayfield was the first dairy in the country, and may be the only dairy today, to use this process to remove all unwanted flavors and odors from milk. Combined with our famous yellow jug, this system ensures Mayfield Milk always has a fresh, consistent flavor, glass after glass.”

Today, Scottie and Rob Mayfield make up the third generation of the Mayfield family who help oversee the dairy’s operations. And, while both credit the leadership of their parents for making Mayfield one of the Southeast’s leading dairies, they’ve certainly done their part, too.

“We’re looking forward to celebrating our 100 year anniversary in some exciting ways with our customers throughout the year,” he added.