Beginning in June 2010, ECELA will be offering its students the one-of-a-kind opportunity to participate in a Buenos Aires Health Fair while learning Spanish. This program will enable students interested in becoming health care professions to get hands-on experience in a Spanish-speaking environment while providing much-needed medical services to local residents. 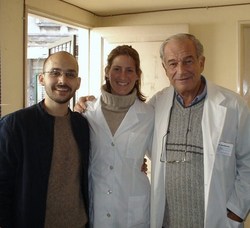 Students who take part in the program will go home prepared to converse with Spanish-speaking patients in emergency rooms, maternity wards, and many other clinical situations.”

ECELA Spanish school in Argentina has announced a trailblazing program that will benefit not only its Spanish immersion students, but also Buenos Aires citizens who are in need and have not had the opportunity to receive proper medical attention and advice. Organized jointly with local community centers, the roving health fair will be in a different under-resourced barrio (neighborhood) each week, providing visitors free health education as well as screenings for potential medical issues like diabetes, skin cancer, and glaucoma.

Accepted participants will learn Spanish in Buenos Aires during the morning session and volunteer at the health fair in the afternoons. The month-long program, limited to 24 nursing, premed, and medical students, debuts in June 2010, with a second group of students in July. The fair offers ECELA Spanish students a rare opportunity to attend a Spanish school in Argentina while assisting impoverished Argentines with their medical needs. While ECELA is located in the posh, tree-lined Recoleta neighborhood, the fair will focus on the under-resourced industrial belt, a grim, low-income area which tourists normally only see from a comfortable taxi on the way to the airport.

In addition to the volunteer health care students, several Argentine medical professionals and students will be on hand. ECELA Regional Director Cecilia Quezada stated, “We are really looking forward to the cultural exchange that will be taking place at our health fair. This is an ideal opportunity for two communities to come together to support a common goal.”

Students will be able to get hands-on experience as they participate in providing the medical screenings to Buenos Aires residents. While ECELA has been offering clinical shadowing at its language schools for several years, the new program offers students a deeper level of immersion in the medical community while they learn Spanish in Buenos Aires. Ken Ingraham, President of ECELA, addressed the global benefits of the program, “We are excited about the health fair because we are not only providing to the local community here in Buenos Aires, but we are also helping the often overlooked Latin communities in the States. Students who take part in the program will go home prepared to converse with Spanish-speaking patients in emergency rooms, delivery rooms, and many other clinical situations.”

While this year's pilot program has a limited number of spots at the Spanish school in Argentina, ECELA will expand the health fairs in 2011 to its locations in Chile and Peru. For information on how to apply for a spot in the Buenos Aries health fair, contact healthfair(at)ecela(dot)com.

About ECELA
ECELA operates Spanish schools in the South American countries of Argentina, Chile and Peru. ECELA instructs over 2000 students per year and the program’s students originate from over 30 countries. With 20 hours of small group classes per week, cultural activities and excursions, and the advantages of living in a Spanish-speaking environment, immersion students advance very rapidly. To learn more about ECELA’s programs visit the ECELA website.

At immersion schools in South America, Spanish classes often have 4-6 students.Studying Spanish with ECELA is a very international experience. With students from over 40 countries, a typical class of six might have two Americans, a Brazilian, a Swede, a German, and an Australian.

ECELA President Ken IngrahamKen Ingraham grew up in Dover, NH and is a graduate of Cornell University. He lives in South America and has been president of ECELA since 2003.