Amazing woman spends her winters in city 80 miles north of Las Vegas while playing penny slots and attracting attention with her enthusiasm. 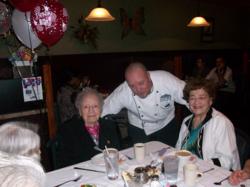 She is absolutely incredible.

With all its customers, there is little doubt that Annie Mancuso is among the favorites at the Virgin River Hotel Casino.

The energetic former resident of Flushing Long Island, N.Y., spent her 108th birthday with her family and friends at the Virgin River Feb. 18 before playing her favorite penny slot machine and having the time of her life as customers all over the hotel started singing happy birthday to her.

Born Anna Marie Gottone in 1904, Mancuso is a one-of-a-kind. She is even part of a research program at Boston University where experts study long life and how senior citizens like her keep on keeping on in a world filled with endless challenges.

Considered a Super Centurion by Boston University, Annie has been a part of the study since she turned 105.

“She is absolutely incredible,” said hotel host and ambassador Lex Hall, 67. “No question that she’s one of the most interesting guests we have ever had here. She plays her favorite slot serving as somewhat of a cheerleader to anyone in the casino. “Annie is very invigorating to the rest of us. She is very spry for her age. We can all learn from her, that’s for sure.”

Needless to say, Annie Mancuso is a historian. She lived in New York with her parents before moving to Denver in about 1920.

Before she had turned 30, Al Capone was imprisoned for income tax evasion, the U.S. officially got the National Anthem; the Empire State Building was completed; scientists split the atom; the Great Depression rocked the country; and notorious bank robbers Bonnie and Clyde had been gunned down.

Air conditioning was invented and Amelia Earhart became the first woman to fly solo across the Atlantic.

By the time she was 40, little Annie had seen two World Wars; along with health risks that included Influenza in the 1920s. In fact, Annie’s oldest sister, Virginia, died of Influenza in 1926.

The timeline goes on and on, but one thing remains for sure for the woman who would eventually have three children serving as a wonderful wife, mother, cook and a very talented seamstress.

Life has been good for the woman and it gets better every day for the bubbly lady with so much energy and vigor that she could lead a Dale Carnegie class with her positive vibes.

“Our house was always meticulous and we could always smell good food cooking,’’ said daughter Rosemarie Morelli, who owns a condominium in Mesquite.

“She made homemade bread and always had a good laugh. She was just a typical Italian wife and mother and an excellent cook.

“I look back at the days when I was growing up and my mom had great pride in her home. When she wins at the slot machine, you can hear her giggle. She likes the Virgin River because it’s my favorite. I love the Virgin River and Lex Hall is one of our best friends.”

Morelli said her mother’s faith has undoubtedly played a big part in her long life.

“Mom is a very dedicated Catholic,” she said. “She goes to La Virgen De Guadalupe Catholic Church in Mesquite and loves it. She has survived many setbacks in her life and a lot of that is because of her strong belief in God.”

Annie Mancuso loves hanging out in Mesquite during the winter months before retreating to Murray, Utah near Salt Lake City in May. They then move on to Grand Junction, Colo., in the latter part of June and return to Mesquite right after Christmas.

With an ideal altitude of about 1,650 feet and daytime temperatures that average about 75 degrees in Mesquite, the winters are ideal.

It’s in Mesquite that the slots are hot at the Virgin River while the weather can be brutally cold in northern Utah in the wintertime.

Mancuso is remarkably healthy for her age using a walker to get around.However, she didn’t even start using the walker until last year.

“I really like Mesquite,” Annie says. “It’s nice and I really enjoy living there.”

“She is very healthy and has that twinkle in her eye,” Morelli says. “She loves her meals and really loves her chicken along with her salads.”