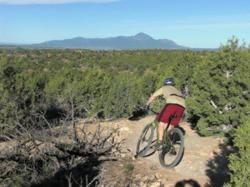 The riding in Mesa Verde Country is nothing short of world-class. The area is recognized worldwide for the abundance and quality of archeological sites scattered throughout the area.

The landscape throughout Phil’s World is primarily Colorado desert, with some running through waist-high jumiper trees and along the rims of cliffs. The entire system lies in the shadow of Mesa Verde National Park. Built and maintained by mountain bikers, Phil’s World is unique in that it resides on state trust lands leased by the local Kokopelli Bike Club.

“Phil’s World is fast becoming a destination point for mountain bikers from around the country,” says Jimbo Fairley, co-owner of Kokopelli Bike and Board in Cortez. “The rolling terrain and layout of the trail make it a fun, fast, flowing ride. “Whether a visitor participates in the relay race or just comes to ride, few places in the country can surpass the views and the rides found on Phil’s World and other area trails.”

Sand Canyon Trail
Winding initially over slickrock, the trail becomes dirt as it wanders through a piñon-juniper forest. Located inside the boundaries of Canyons of the Ancients National Monument, Sand Canyon is one of the only singletrack mountain bike rides in a national monument, according to Scott Darling, co-owner of Kokopelli Bike and Board. Several spur trails lead to archaeological sites and small cliff dwellings tucked in sandstone alcoves. “Riders can see a half-dozen ancient cliff dwellings on a 15-mile ride,” says Darling. “It’s like a small, up close-and-personal Mesa Verde National Park.”

Trails for every skill level and distance
Bike trails and rides exist for every skill level and distance in Mesa Verde Country, with maps and equipment available at local bike shops. Locally produced maps at http://www.BigLoopMaps.com detail rides for all ability levels and features terrain from year-round desert trails to high-altitude mountain routes. Additional trails include:

“The riding in Mesa Verde Country is nothing short of world-class,” says Darling. “The area is recognized worldwide for the abundance and quality of archeological sites scattered throughout the area. Add in great mountain biking on single-track trails – vs. jeep roads – and it’s an experience not to be missed.”