The Minnesota Historical Society announced today that Nina M. Archabal will retire after 33 years of service to the Society, 23 as its director and state historic preservation officer. 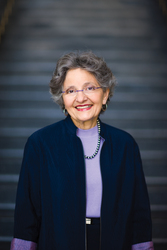 Her vision, wisdom and commitment to education have led the Society to be known today, both nationally and internationally, as setting the standard for excellence in public history.

The Minnesota Historical Society announced today that Nina M. Archabal will retire after 33 years of service to the Society, 23 as its director and state historic preservation officer. In a statement to the Society's board and staff, Archabal said she will continue as director until a successor is chosen, which is expected to be no later than the end of the year. "I have lived a joyful life of service to education in my adopted home in Minnesota,” Archabal noted. "Though I won't be coming to my office at the History Center, I hope to find other ways to ensure that the values that have made Minnesota special will continue long into the future.”

"The lessons of history inspire and inform us throughout our lives, enabling us to make wise decisions for the future,” said former Vice President Walter Mondale, a member of the Society's Honorary Council. "The Minnesota Historical Society is our state's guardian of history, giving our schoolchildren and citizens of all ages the opportunity to learn from the past while moving forward into the future. Minnesota is fortunate to have had the spectacular Nina Archabal at the helm of the Minnesota Historical Society. Her vision, wisdom and commitment to education have led the Society to be known today, both nationally and internationally, as setting the standard for excellence in public history.”

A native of Massachusetts, Archabal came to Minnesota in 1965 following completion of her bachelor's and master's degrees at Harvard University. She earned a Ph.D. in music history from the University of Minnesota in 1979.

Archabal began her career at the Society in 1977. After serving nine years as deputy director, she was selected to become the Society's 10th director in 1987. The Society has grown significantly during Archabal's tenure, with the development of the Minnesota History Center as the state's premier history museum and library, as well as the establishment of new and innovative programs across the state.

In addition to the History Center, Archabal oversees a statewide network of historic sites and museums visited annually by nearly one million people, including Historic Fort Snelling, Split Rock Lighthouse, the James J. Hill House and the Mille Lacs Indian Museum, which was created with the help of the Ojibwe people whose story it tells. Archabal also provided the vision and leadership for the creation of Mill City Museum, an innovative museum and education center constructed within the ruins of the National Historic Landmark Washburn A Mill on the Minneapolis riverfront. In receiving recognition for these accomplishments, Archabal is quick to praise the Society's staff members, whom she credits for the institution's national reputation for excellence.

Archabal's influence has reached far beyond Minnesota, encompassing both national and international service to other educational and cultural organizations. She has served as the chair of the board of the American Association of Museums and currently leads the United States Committee of the International Council on Museums. She was elected to the Harvard Board of Overseers in 1997 and will receive the Harvard Medal at commencement ceremonies in May for her service. In 1997, President Clinton presented Archabal with the National Humanities Medal. She also holds the University of Minnesota Outstanding Achievement Award, an Honorary Doctorate of Humane Letters from Carleton College and the Colman J. Barry Award from St. John's University. For her contributions to historic preservation, Archabal received the President's Award from the National Trust for Historic Preservation.

"I cannot overstate Nina Archabal's contributions to the Minnesota Historical Society and the importance of history in this state,” says the Society's board president William Stoeri. "For more than 30 years she has been the embodiment of the Society and has overseen its impressive growth and achievements. We will miss Nina, her energy, and her expertise, but the Society will continue to build on the strong foundation created in no small part through her efforts and leadership.”

The Minnesota Historical Society (http://www.mnhs.org) is a non-profit educational and cultural institution established in 1849. Its essence is to illuminate the past to light the future. The Society collects, preserves and tells the story of Minnesota's past through museum exhibits, libraries and collections, historic sites, educational programs and book publishing.