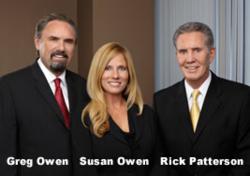 I believe there will be more victims who come forward

The children all attend Miramonte Elementary School, part of the Los Angeles Unified School District (LAUSD). The lawsuits specifically accuse two LAUSD teachers, Mark Henry Berndt and Martin Bernard Springer, who were both arrested last week on criminal charges, on suspicion of lewd conduct with two female students and on suspicion of committing lewd acts on 23 of his students respectively.

It also cites the LAUSD and Miramonte Elementary's principal Martin Sandoval, for failing to adequately protect the students.

Los Angeles personal injury attorney Gregory James Owen of Owen, Patterson & Owen said he planned to file four more lawsuits on behalf of Miramonte students this week and represents a total of nine clients in the still-unfolding case. He added "Of particular concern is the fact that Berndt would often lock his classroom door which is a violation of LAUSD rules. We all have a duty to help these children have the best lives they can even though they will never be the same."

The accusations have fueled protests by many of the parents and prompted Los Angeles County school officials to temporarily replace the entire staff at Miramonte during an exhaustive investigation.

On Wednesday, Los Angeles County Sheriff's Lieutenant Carlos Marquez said investigators had uncovered 200 more images of a similar nature on a computer at the drug store where the original photos were found.

Dominguez stated, "I believe there will be more victims who come forward," adding that parents in the largely immigrant community have been reluctant to contact police.

Attorney Jessica Dominguez is a respected commentator on radio, TV, and in the press. She has received countless awards from both elected officials and community agencies for her hard work and advocacy on behalf of immigrants.

About Owen, Patterson & Owen
Owen, Patterson & Owen represent injured plaintiffs in accident, defective product, severe injury, and wrongful death cases. Their consumer advocacy and demonstrated ability to devote substantial resources in both time and money have generated hundreds of millions of dollars in recoveries for clients. They can be reached through their website at http://www.opolaw.com or by calling (800) 676-5295.