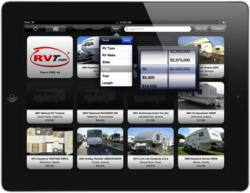 Apps are a current trend with mobile, but we don’t know if it will remain that way forever,

In the two and a half years since the company’s summer 2010 launch of its original iPhone app, RVT.com Mobile, consumer use has soared with tens of thousands of downloads to date. Six months later the company launched its iPad app, RV Classifieds. Growth in consumer use can only be described as exponential.

At the time of this writing the current versions of both iOS apps are downloaded thousands of times per month – typically between 300 and 600 per week (not including update downloads).

What's even more interesting is that the apps generate what appears to be much higher quality traffic, scored by visitor engagement metrics (for example – visitors staying on the site longer).

A comparison of mobile app traffic to normal website traffic stats revealed that app based visitors generate significantly higher page view counts, as well as much lower bounce rates (the number of visitors that only view one page and then leave). Both of these are considered to be important indicators of quality traffic. This difference is substantial, and enough to make any website owner stand up and take notice.

As a leading source of online classified advertising for RVs, RVT.com was the first in the industry to offer visitors the convenience of both iPhone and iPad apps to buy and sell new and used recreational vehicles.

On the development side, one key factor has been to try and make the best use of both the phone and tablet platforms. While the RVT.com iPhone app is primarily a utility (search) tool designed for fast information, the iPad app is designed more for content consumption – offering a digital “magazine style” format that takes advantage of the tablet’s larger screen size.

For companies that are already offering an app, or are considering going the app route, RVT.com claims that one of the hallmarks of its success in the app marketplace has been its willingness to listen to its audience and incorporate user requested features in the updated app versions.

Here's a brief look at each app as they have developed since their release:

RVT.com Mobile for iPhone – launched summer 2010. RV buyers can quickly and easily search more than 50,000 new and used RVs for sale by keyword, make, model, stock number or location. An update in January 2011 added an advanced search function similar to the main website. In response to a search timeout issue, the 2nd version of the app was released in June 2012.

RV Classifieds for iPad is released in December of 2010, building on the success of the iPhone offering. Several improvements have been made to the app since its launch, including an update in December of 2011 which added the new ability to search by multiple states/provinces in the same session. In August 2012 the price, length, year and location filter selection tools saw an improvement.

As a market leader, embracing new technologies and anticipating future trends is key. “Apps are a current trend with mobile, but we don’t know if it will remain that way forever,” says Shawn Friesen, Vice President of RVT.com. “Apps are currently ‘all the rage’ for the mobile consumer, however, they are expensive and time-consuming to develop, and with so many devices now flooding the market, near impossible to create and keep apps current. On the other hand, mobile websites or ‘web-apps’ can be easily formatted for all devices, and take significantly less time to develop."

“Web apps could offer significant benefits for both consumers and businesses, including eliminating the need to go through an app store, employ a separate development team, all the while ensuring optimal user experience on all smart phones and tablets.”

Both RVT.com apps can be found on the Apple iTunes Store by searching "RV Classifieds".

ABOUT RVT - RVT.com is a leading RV classified, banner and display advertising provider, and the flagship of a network of RV related websites which generate over 800,000 monthly consumer visits. Launched in 1999, RVT.com is on a continual quest to offer a superior RV Shopping experience to consumers, as well as the best possible service and support to private sellers, dealers, manufacturers and suppliers to the RV industry.