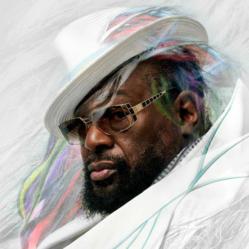 "I salute Oxfam America’s tireless efforts to save lives around the world during the past 40 years. I'm honored to be a part of the MojaMoja Brunch and I’ll be calling on all P-Funk fans to support the Darfur Stoves Project."

Funk legend and Rock and Roll Hall of Famer George Clinton will be honored Saturday, February 9, 2013, with the Vanguard Award by global NGO Oxfam America at the 5th annual MojaMoja Pre-Grammy Brunch and Benefit Concert presented by 89.9 KCRW. Performances include a special DJ set tribute to Clinton by KCRW’s Garth Trinidad and an international line-up of artists such as Fink, Adrian Younge presents the Delfonics featuring William Hart, Yuna, Chicano Batman and Chloe Flower. All of the artists are donating their time to perform at the benefit concert and brunch to raise awareness and funds for Oxfam America and partner The Darfur Stoves Project. The event is scheduled from 11:00 a.m. - 2:00 p.m., at the W Hollywood in Los Angeles, California. Tickets are available to the public and can be purchased exclusively online at: http://www.themojamoja.com.

More than 250 funk fans and key influencers are expected to pay tribute to the 71 years young American singer, songwriter, bandleader, music producer and principal architect of P-Funk. Clinton is known by many alter egos like Sir Nose D'VoidofFunk and Dr. Funkenstein. However, in 2012, the psychedelic maestro received an honorary doctorate from the Berklee College of Music becoming a real doctor. "Oxfam America is honored to present Dr. George Clinton with the 2013 Vanguard Award at the MojaMoja Brunch and Benefit Concert. George's musical genius has inspired artists around the world and helped to break creative boundaries in all kinds of art for nearly half a century," says Bob Ferguson, Oxfam America's Manager of Creative Alliances & Music Outreach.

Ten years ago this year was the start of the conflict and humanitarian emergency in Darfur, Sudan. Armed conflict in Darfur has uprooted more than 2.5 million people. During the past decade Oxfam is working with Sudanese partners to provide clean water, agricultural support, tree seedlings, small business trainings, grants for people living in and around the crowded camps and fuel-efficient stoves. A portion of all tickets sales from the brunch will support the production of these stoves. Dr. George Clinton pauses for just one day during his busy East Coast tour, flying from Boston to Los Angeles to accept the honor and help raise awareness for Oxfam America. “It’s an obligation and opportunity to be associated with a campaign that promotes ways to end global hunger,” says Dr. Clinton. “I salute Oxfam America’s tireless efforts to save lives around the world during the past 40 years. I’m honored to be a part of the MojaMoja Brunch and I’ll be calling on all P-Funk fans to support the Darfur Stoves Project.”

“Other artists on the MojaMoja Brunch line-up like The Delfonics are heavily sampled, and so their music catalog is still highly profitable,” added Dr. Clinton. “We want to make sure they are being paid.” As a result, in addition to his support of Oxfam America, Dr. Clinton is spearheading a social justice campaign to raise awareness of how other artists are having their works stolen via copyright fraud. Clinton is using his celebrity and Flashlight2013.com to bring attention to this cause. On Sunday, February 10th, the funk icon and his band Parliament–Funkadelic (P-Funk All Stars) will resume their non-stop 2013 tour. Visit: http:/bit.ly/pfunktour for concert dates.