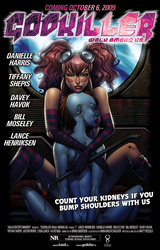 one of the best online animated series to date

There was a time when smart, sophisticated, darkly-imagined animated films for twisted adults were being produced in the US by psychotic artists like Ralph Bakshi and Sam Kieth... well, the good news is those times are back and weirder than ever! Rob Zombie is imagining big-boobed, naughty Nazis in his Haunted World of El Superbeasto, Guillermo del Toro is bringing animated horror to the Mouse House, Watchmen Motion Comics' Dr. Manhattan and Rorschach are watching over the Warner lot, and Halo-8 Entertainment is working double-time to match visionary artists with bleeding-edge filmmakers for an entire slate of ass-kicking animation by a team of brash comic book storytellers including Tim Seeley (Hack/Slash, Loaded Bible) and James Farr (Xombie).

'Godkiller: Walk Among Us' Episode 1 comes to DVD on October 6th, 2009 and is available for pre-order on Amazon.com.

The trailer is posted here and optimized for easy embedding.

About the Godkiller: Walk Among Us dvd series:
Godkiller's innovative release schedule that brings the episodic nature of comic books to DVD will roll out as follows:

'Godkiller: Walk Among Us' is the epic story of a boy on a quest to save his dying sister. Based on the comic book Pizzolo created with Anna Muckcracker, Godkiller takes place in a dark-future after economic collapse, after nuclear holy war, and after Earth is colonized by alien races. Tommy and his kid sister Lucy live in an orphanage in one of the few remaining city-states, but Lucy is critically ill and desperately in need of a new heart. Tommy's odyssey to find a new heart for his sister begins when he follows an organ-stealing prostitute named Halfpipe out of the city-state and into the savage borderland known as Outer City. Godkiller mixes unforgiving brutality, quantum physics, conspiracy theory, and secret history for an iconoclastic hero's journey like none before it.

'Godkiller: Silent War' is the story of the end of civilization as we know it. In the near future, 17 year old Joe Junior and his girlfriend Bee run a speakeasy in the basement of an abandoned NYC church where they serve narcotic drinks to underagers while providing sanctuary and black-market employment to draft dodgers. When Joe is recruited by an armed cult of populist assassins, he is thrust into a secret world of international cabals, alien conspiracies, and the countdown to Armageddon. [Silent War is a sci-fi/urban-fantasy novel that will be released as a serialized audiobook on the Walk Among Us dvds]

Pizzolo explained "When we decided to make an anime adaptation of the comic book, I couldn't see how a traditional animated approach would do justice to Anna's incredibly lush and detailed illustrations. It made perfect sense to adapt the medium to suit her art, rather than vice versa."