Vivek Y. Reddy, M.D., one of the nation's leading cardioelectrophysiologists, has joined The Mount Sinai Medical Center as Director of Electrophysiology Laboratories. 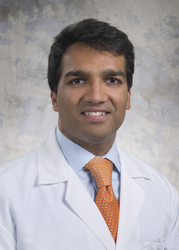 Mount Sinai Heart is committed to developing groundbreaking therapies for cardiac patients. The appointments of Dr. Reddy and his team demonstrate that we will continue to seek out the greatest talent available to improve our services

Dr. Reddy leads a team of physician-scientists who are developing definitive therapies for cardiac arrhythmias - including atrial fibrillation, the most common abnormal heart rhythm affecting millions of Americans, and ventricular tachycardias, the most common cause of sudden cardiac death - with the intent of eliminating the need for chronic medications. Dr. Reddy's efforts include fundamental research on the role of imaging modalities (MRI, CT, Ultrasound) to guide cardiac electrophysiology procedures.

"Mount Sinai Heart is committed to developing groundbreaking therapies for cardiac patients. The appointments of Dr. Reddy and his team demonstrate that we will continue to seek out the greatest talent available to improve our services," said Valentin Fuster, M.D,. Ph.D., Director of Mount Sinai Heart.

He has published numerous articles, most famously a seminal multi-center clinical trial on ventricular tachycardia ablation. Known as SMASH-VT (Substrate Mapping and Ablation in Sinus Rhythm to Halt Ventricular Tachycardia), the study examined the use of prophylactic catheter ablation to prevent shocks in patients receiving defibrillators. The findings from SMASH-VT were published in the New England Journal of Medicine.

Dr. Reddy was most recently Director of Cardiac Electrophysiology and Associate Professor of Medicine at the University of Miami, Miller School of Medicine. There he helped build a world-class cardiovascular team specializing in heart rhythm disorders. Prior to that, Dr. Reddy worked at Massachusetts General Hospital in Boston for seven years, serving as Director of the Experimental Electrophysiology Laboratory. Since 2001, he also served as Instructor of Medicine at Harvard Medical School. Dr. Reddy has received numerous honors including the Center for Minimally Invasive Therapy Fellowship and the Howard Hughes Medical Institute Scholarship. Dr. Reddy's team includes Andre d'Avila, MD, PhD, and Srinivas R. Dukkipati, MD, who will also be joining Mount Sinai.

Dr. Reddy has also served since 2005 as a Co-Director of the Annual Boston Atrial Fibrillation Symposium, and he founded and has directed since 2006 the Annual International Symposium on Ventricular Arrhythmias. Dr. Reddy has been the Director of Experimental Electrophysiology at Massachusetts General Hospital, a teaching affiliate of Harvard Medical School.

Mount Sinai School of Medicine is internationally recognized as a leader in groundbreaking clinical and basic science research, as well as having an innovative approach to medical education. With a faculty of more than 3,400 in 38 clinical and basic science departments and centers, Mount Sinai ranks among the top 20 medical schools in receipt of National Institute of Health (NIH) grants.