With advances in all aspects of the program, MAGIX brings 3D capabilities home to the consumer, at a price that anyone can afford. Movie Edit Pro Classic also promises to be the fastest Movie Edit Pro 17 of all time. 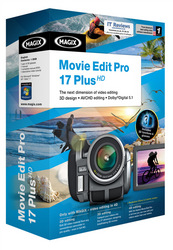 We are pleased to present the fastest Movie Edit Pro of all time. This is mainly due to the optimized MAGIX hybrid video engine, whose interaction of CPU and GPU has been further optimized. Thanks to various optimizations all versions have a noticeably improved performance

This past year theatre goers have been amazed by amazing 3D movies made with dazzling effects, large budgets, and all star casts. Now MAGIX is making it possible to bring home some of that technology and create 3D movies at home. Using the technology that movie goers have seen on the big screen, MAGIX Movie Edit Pro 17 Plus allows users to create their own 3D movies using any stereoscopic method; from the simple (red/cyan) to the more complicated (shuttered). On top of that the programmers at MAGIX have loaded version 17 with over 50 new features, effects, and templates.

"We are the first ones to offer the new technology in a major consumer video editing software. Movie Edit Pro 17 Plus allows users to edit 3D footage just as easily and with the same tools as they would with 2D material," said Benjamin Kraatz, MAGIX Senior Marketing Manager. MAGIX Movie Edit Pro 17 Plus has already been optimized for 3D video footage shot using the new Panasonic HDC-SDT750 camcorder- one of the first consumer level 3D video cameras.

In the development of the new version, MAGIX has endeavored to create an easier to use interface and simplified user tools and templates; all with the goal of making the movie creation experience more fun, intuitive, and better all-round. With this the classic version of MAGIX Movie Edit Pro 17 now boasts full AVCHD workflow, and the required codecs as a standard feature.

Importing, editing, previewing and exporting are now even faster and easier with MAGIX Movie Edit Pro 17. New assistants help beginners to quickly familiarize themselves with many different formats and options. The standard features of MAGIX Movie Edit Pro 17 are quite impressive and include: full AVCHD support, corresponding codecs and burning functions for Blu-ray and AVCHD discs. Movie Edit Pro 17 is the first program among major video editing software to include AVCHD SmartRendering for up to 90% shorter rendering times (included in all three versions).
"We are pleased to present the fastest Movie Edit Pro of all time. This is mainly due to the optimized MAGIX hybrid video engine, whose interaction of CPU and GPU has been further optimized. Thanks to various optimizations all versions have a noticeably improved performance," says Benjamin Kraatz.

Sci-fi productions don't have to cost a million: MAGIX Movie Edit Pro 17 Plus offers ambitious hobby directors everything they need for just $89.99 US ($99.99 CAN). Stereoscopic footage from 3D camcorders can be imported and edited just as easily as regular HD videos. If users do not have a 3D camcorder, they can use Movie Edit Pro 17 Plus to create three-dimensional images using footage from two cameras. Automatic features help users synchronize and align both video tracks. The 3D effect can be intensified even further by adding 3D titles and transitions and with the integrated Dolby®Digital 5.1 Creator. In the anaglyph, polarizing filter and shutter modes, users can use the assistant to export 3D productions to Blu-ray Disc, the Internet, or as files in many offered formats.

And 3D is not all! MAGIX Movie Edit Pro offers 50 new features that are of particular interest to HD movie makers and creative video enthusiasts. For example, new effects masks allow users to pixelate faces, license plates, or they can place color gradients over entire videos.

For the release, Movie Edit Pro 17 Plus will be offered at a special promotional price for the first week of October.

Features in all versions of Movie Edit Pro:

NEW to version 17 Plus