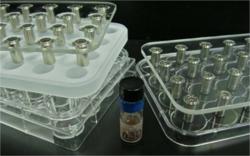 "With MidSci's distribution of the BioAssembler, it will provide easier access for researchers interested in this easy to use 3D cell culture platform"

“With MISDCI’s focus on the cell culture market in the US and the capabilities of its sales and marketing organization in addressing the needs of the life science researchers in a variety of market segments, this distribution partnership will provide even easier access to our 3D cell culture for researchers throughout the U.S.” stated David Lee, President of n3D.

“MIDSCI is excited about this opportunity. What n3D has done is replicated cell growth in a true 3D structure that provides better recovery, imaging, and reproducibility. This fits perfectly with our existing product lines.” said Scott Leigh, Vice President of Sales of MIDSCI.

n3D and MIDSCI are also sponsoring a for researchers using the 3D cell culture technology. Researchers can submit data, pictures or videos of their work with the BioAssembler to be considered for the Mad Scientist contest.

About n3D
n3D is the award recipient of the Texas Emerging Technology Fund (TETF), National Science Foundation SBIR (Phase I and Phase II) awards, and the Goradia Innovation Prize. Located in Houston, TX this highly innovative biotech start-up is already making waves in the Biotechnology and Nanotechnology industry. Most recently, the company was featured in Nature Nanotechnology and MIT Technology Review (Bio-Assembling in 3-D with Magnetic Levitation - Technology Review) for its state-of-art 3D cell culturing technology.

About MIDSCI
MIDSCI was established in 1983 in St. Louis, MO. With representatives throughout the United States and sales all around the world, MIDSCI is a growing company. Their main focus is in providing great valued products through the basic tools of molecular bioscience. They represent some of the most reliable brands in the market: TPP, Avant, AvantGuard, Bullseye, and Pryme.