Author Brian McLaren Unveils Spiritual Practices for the "Not Religious" in 'Naked Spirituality: A Life with God in Twelve Simple Words'

In the same way he revitalized our faith in A New Kind of Christianity, church leader Brian McLaren reinvigorates our approach to spiritual fulfillment in Naked Spirituality—by tearing down the old dogmatic practices that hamper our spiritual growth, and leading us toward the meaningful spiritual practices that can help transform our lives. 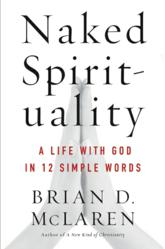 “A rich, brilliant and important book: wonderfully readable and personal, filled with insight and wisdom, it invites us into practices that can transform our lives.” —Marcus J. Borg, author of Speaking Christian

More than 20 percent of Americans define themselves as “spiritual but not religious,” a growing segment that Christian churches are finding tough to attract or keep. Author and speaker Brian McLaren suggests in his new book that a transparent encounter with God is what most spiritual people are seeking – and that this encounter is too often missing from organized religion. McLaren has penned Naked Spirituality: A Life with God in 12 Simple Words (HarperOne, March 15, 2011) to outline a dozen durable, doable spiritual practices that can lead to a truly spiritual life – and even to true religion.

McLaren, heralded in 2005 as one of TIME Magazine’s top 25 evangelicals, writes: “This is a book about getting naked—not physically, but spiritually. It’s about stripping away the symbols and status of public religion—the Sunday-dress version people often call ‘organized religion.’ We are after a lost treasure as old as the story of the Garden of Eden: the possibility of being naked and not ashamed, naked before God and naked before one another, too, where we have no need to cover up, to protect, to posture, to dress to impress, just the freedom to be who we are, what we are, as we are. I hope this book will help you strip away distractions and discover that precious hidden treasure underneath.”

Naked Spirituality offers twelve words, or practices, to anchor the reader in God and free him or her to do the holistic work the gospel calls for – to pray as well as save the planet; to worship as well as lift up the poor and needy. McLaren shares practical wisdom for living a truly spiritual life as he presents a dozen exercises for beginning and sustaining a meaningful relationship with God. Rooted in four seasons, these practices are represented by simple words which are easy to remember but rich in transformative power:

McLaren invites readers to leave behind negative experiences of religion so they can become truly spiritual people and reclaim the promise of religion. He writes: “Religion, by its etymology, is about connecting us together again. In this light true religion and naked spirituality are two names for the same thing: seeking vital connection. So if religion is experienced as promoting selfishness rather than otherliness, as prioritizing one’s own personal salvation and religiosity over the well-being of others, then religion becomes anti—religious. Maybe if we name this kind of unspiritual phenomenon “de-ligion” instead of “religion,” we can save the latter word for the traditions that enhance and support naked spirituality.”

ABOUT THE AUTHOR
Brian McLaren is an author, speaker, pastor, and networker among innovative Christian leaders, thinkers, and activists. His groundbreaking books include A New Kind of Christian, A Generous Orthodoxy, The Secret Message of Jesus, and Everything Must Change. Named by Time magazine as one of America's top twenty-five evangelicals, McLaren has appeared on “Nightline” and “Larry King Live,” and has been covered by The Washington Post and the New York Times. His website is BrianMcLaren.net.