Celebrating more than three years clean, Jason Lawing of Asheville, North Carolina has come a long way from the days when he was making and selling 1-2 kilos of methamphetamine a week. 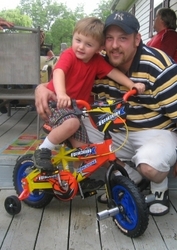 Narconon graduate Jason with his son

Life after Narconon is a whole lot better! In my darkest hours, I never thought I could be this happy. Now every day is a healthy bright day after Narconon for me and my family

Facing jail time in 2006, his mother and biggest advocate convinced the judge that Jason was not a criminal, but a drug addict that needed help. She believed her son could make it if he were in a long-term drug treatment program, unavailable at the time, in her own state. She searched online and found what she was looking for - Narconon of Georgia, a non-traditional program which employs sauna therapy and life skills to prepare its clients for full and successful re-entry into life.

Jason graduated from the Narconon program after four months. He returned to Asheville and immediately went to work at his father's company, Allied Wheel and Alignment in West Asheville. "Life after Narconon is a whole lot better! In my darkest hours, I never thought I could be this happy. Now every day is a healthy bright day after Narconon for me and my family," said Jason. So profound was his recovery, he was awarded full custody of his son by the courts over his ex-girlfriend. A couple of years later Jason's story of successful recovery was chronicled in the Asheville Citizen Times.

Three and half years after graduation from Narconon of Georgia, Jason continues to live life to the fullest. "My son is the most wonderful thing to me and I will make sure that he never follows the same path that I took. My mother and father are proud and no longer have to worry about me," added Jason

Since being featured in the Asheville Citizen Times, he completed ED BARGY'S racing school. He soon qualified for motorcycle road racing with WERA (West, East Racers Association). At his first race at Nashville Super Speedway, Jason started 47th and finished 9th. He continued to the Nationals (which are by invitation only) and finished 18th in the country, no small feat for new kid on the block

Work at the family company is going well for Jason. Since completing his Narconon drug treatment program, he no longer gets frustrated and can complete tasks at hand. His talents are an asset to his family's company, which has managed to do well in spite of the economy.

Jason future plans include to raising his son as a sober parent, working to expand the family business and becoming a pro racer.

Mary Rieser stated, "I am proud of Jason and happy that I had the opportunity to help such a special person. Jason's full recovery from drug addiction and now living a happy and productive life is testament to the facts that stable recovery is achievable for those who want it and Narconon is truly the New Life Program."