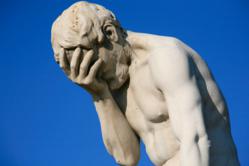 Facebook pitfalls can be devastating beyond the confines of the social network.

While it's true that many people don't take advantage of privacy filters and limited sharing options, we should never assume that it's okay to re-post private information without permission.

"The overarching theme of the article is to think before you post," said strategic marketing consultant Nate Long. "The social web would be a much nicer place if only everyone followed that one guideline."

The first warning Long addresses is capturing and sharing pictures, status updates or other user content without the permission of the person who created it.

"While it's true that many people don't take advantage of privacy filters and limited sharing options, we should never assume that it's okay to re-post private information without permission," said Long. "We recently saw public drama unfold when a photo Randi Zuckerberg posted to Facebook was screenshotted and re-posted to a public Twitter feed."

Some blamed Randi for not implementing the proper privacy settings when posting the image; others blamed Randi's brother Mark Zuckerberg, whose social network, they say, ignores the privacy concerns of its users; while Randi herself blamed the person who re-posted the image, calling the move lacking of "human decency."

"The truth is that all are to blame a little bit," said Long. "But there is an important lesson to be learned here on all sides: People care about privacy, so respect it."

The second pitfall of the article also relates to privacy. The articles states that it's important to demand greater privacy and controls from the social networks, but to never assume it's been granted. The best practice, says the article, is to never post anything that would be embarrassing if made public.

"This actually happens more often than you might think," said Long. "People get offended in the digital world just like they do in real life. In fact, the lack of vocal tone, facial expressions and other emotional queues absent in a Facebook discussion can easily lead to miscommunication."

For the full article, visit NateLongMarketing.com.