“Where People Feast, An Indigenous People’s Cookbook” now in its second printing, is available for purchase. The award-winning cookbook is full of native recipes and features indigenous and wild foods and the native food traditions of the Pacific Northwest Canadian coast. 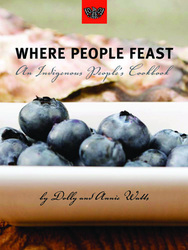 Native food traditions of North America are centuries-old and endure to this day. Feasts that include a bounty of land and sea are the focal point of celebrations and ceremonies for many. Food is what connects them to family, community, and the afterlife.

“Where People Feast, An Indigenous People’s Cookbook” one of the few indigenous cookbooks that focuses on Native American foods, including the culinary traditions and techniques of those who live along the Pacific Northwest Coast of British Columbia, Canada, is now in its second printing and available for purchase. The cookbook is also available in electronic format for use with the Sony® Reader.

“Where People Feast, An Indigenous People’s Cookbook,” a collection of native recipes by mother and daughter Dolly and Annie Watts, was a Gourmand World Cookbook award-winner and a finalist in the ForeWord Magazine Book of the Year award in the cooking category. With this second printing, chefs and cooking enthusiasts can learn how to prepare and preserve indigenous and wild foods: seafood, game, fruits, and vegetables indigenous to the area, using ingredients both exotic (oolichan, venison, grouse) and common (salmon, crab, berries).

“There has been a lot of interest internationally in our cookbook by the media, chefs, and especially by indigenous people,” explains co-author Annie Watts. “Native food traditions of North America are centuries-old and endure to this day. Feasts that include a bounty of land and sea are the focal point of celebrations and ceremonies for many. Food is what connects them to family, community, and the afterlife.”

Fans of “Where People Feast, An Indigenous People’s Cookbook” will be glad to know that Annie is working on a “Healthy Eating Cookbook” that will offer mouthwatering recipes and daily menus that include the right combination of proteins, carbohydrates, fats, vitamins and minerals to help build the body’s natural defenses. It will feature reduced-calorie menus, post-activity snacks and 100 recipes that are free of dairy, gluten, red meat, yeast, and citrus.

Details about “Where People Feast” and the local native foods movement cultivated by Dolly and Annie Watts can be found at the wherepeoplefeast.com website.

About Dolly and Annie Watts:

Dolly (Watts) McRae and her daughter Annie are from the Gitk’san First Nation in British Columbia and until 2006 were the proprietors of the Liliget Feast House in Vancouver, the only First Nations fine dining establishment of its kind, whose numerous accolades included a four-star recommended rating from The New York Times. For almost two decades, Dolly and later Annie have focused on serving Native cuisine that is both traditional and modern. Many of the recipes are steeped in history; others are contemporary takes that acknowledge other cuisines both near and far. Since closing Liliget Feast House, Dolly and Annie have relocated to Port Alberni on Vancouver Island, BC, where they continue to cultivate an audience for their indigenous cuisine.