Nerium Featured in the Newest Issue of Success from Home

Nerium is excited to announce being the featured company in the new issue of Success from Home magazine. 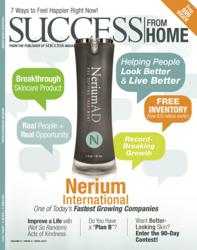 Nerium International has been highlighted in an array of publications, including being the youngest company to ever be featured in industry leader Success from Home Magazine; in November of 2012, Nerium was highlighted in the inaugural issue of Beautiful You magazine. This weekend, they announced to thousands of attendees at the company’s Spring Bash in Grapevine, TX, that Nerium will again be featured in the April issue of Success from Home.

Upon learning that Nerium International will be featured in Success from Home again, Brand Partner Renee Girifalco shared, “This is so exciting - second time Nerium has been featured in less than 2 years! This has never been done before - we've got something SPECIAL!” Girifalco’s sentiments were echoed by thousands of others.

“Nerium International is known for our commitment to our Brand Partners,” says Jeff Olson, Nerium’s Founder and CEO. “By giving them a wealth of professional third-party tools, such as Success from Home, we put them in a position to establish credibility with their prospects while they share the Nerium story.”

Founded in August of 2011, Nerium International markets an exclusive age-defying night cream called NeriumAD. The company’s sales in 2012 exceeded $100 million according to John Fleming, Editor in Chief of Direct Selling News. Fleming announced this statistic at the Spring Bash, and the crowd’s reaction was nothing short of ecstatic. Brand Partner Mariel Filippone summed up the feeling of the majority of attendees: “Nerium is just getting started! This was one product in one country! I’m looking forward to opening other countries this year with more amazing products!