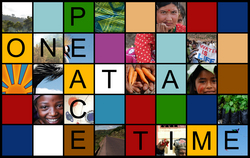 Right and wrong is not that hard. It’s just what you choose to do.” - Willie Nelson, One Peace at a Time

A week of great events in Austin commemorate the DVD release of One Peace at a Time the latest documentary from The Nobelity Project and director Turk Pipkin. Proceeds from the DVD and the Artists and Filmmaker’s Dinner support the Nobelity Project’s education work in the U.S. and abroad, including final construction funding of Mahiga Hope High School in Kenya.

The Austin City Council designates April 5 – 11 as “One Peace at a Time” Week in Austin, highlighted by:

1000 Books for Hope
The goal of 1000 Books is to fill the shelves of the first Hope Library in Kenya, with more Hope Libraries in the works. We’re asking students and adults to DONATE JUST ONE BOOK. The key is to donate your favorite book, or a book that has had great meaning in your life. Donors are asked to write their name and hometown inside the cover, and a short note about why they love the book, or what it has meant to them. Those names, cities and notes serve as introduction to the book and connection to the donor.

One Peace at a Time DVD Release Party
The One Peace DVD release party at Waterloo Records – 5 p.m. on Friday, April 9 – includes a free in-store concert from Austin’s great jazz singer, Kat Edmonson. Be the first to own a copy of this movie about real solutions to the problems we face in the world. And Waterloo Records will accept donations for the 1000 Books campaign all weekend.

Filmed in 20 countries on 5 continents, One Peace at a Time looks at the possibility of providing basic rights – water, food, healthcare, education and more – to every child. The film features Willie Nelson, Secretary of Energy Steve Chu, Muhammad Yunus and many others. Following its sold out World Premiere at Austin’s Paramount Theatre, One Peace played before an audience of 3,000 at the Maui Film Fest where it received the Audience Award, screened at additional film fests, the World Economic Forum in Geneva, and has received the Family Approved Seal from the Dove Foundation.

Proceeds support our education work in the U.S. and abroad, including construction of Mahiga Hope High School in Kenya. The event is nearly sold out, but a few tables and individual seats are still available. Contact Christy(at)nobelity(dot)org

One Peace at a Time is produced by the Nobelity Project, a 501c3 nonprofit “working for a better way.” The Nobelity Project collaborates with Nobel laureates and other inspiring leaders to provide reliable information and innovative thinking on pressing global problems and solutions that work. The trailer to the film, with music by Ben Harper, is at: http://www.nobelity.org

About the Director:
Turk Pipkin is the writer and director of the award-winning documentary Nobelity. As an actor, he appeared in the feature films Friday Night Lights, The Alamo and Scanner Darkly. On HBO’s The Sopranos, Turk played the recurring role of Janice’s narcoleptic boyfriend, Aaron Arkaway. He is the author of ten books including the recent New York Times best-seller, The Tao of Willie, co-authored with Willie Nelson.

"Right and wrong is not that hard. It’s just what you choose to do." - Willie Nelson, One Peace at a Time